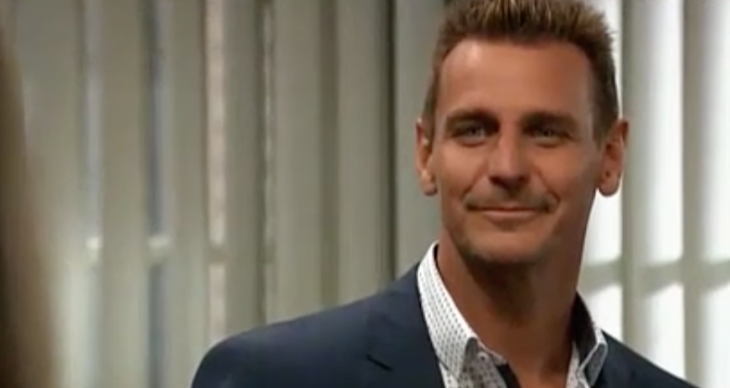 General Hospital (GH) spoilers for Thursday, May 30 tease another day of drama, questions, and shocks for the viewers as some have new owners while others need new kidneys!

First, Jasper Jacks (Ingo Rademacher) shocks Nina Reeves (Michelle Stafford) with two glasses of what appears to be champagne, as she comes to her office at Crimson and finds him there! He tells her to say hello to the new owner of Crimson, and obviously wants her to celebrate with him! She didn’t look quite as impressed with him as she did when they first met at the Nurses’ Ball!

Next, Alexis Davis (Nancy Lee Grahn) talks to Lucas Jones (Ryan Carnes). He is obviously quite upset and worried as he wants to know his and his partner Brad Cooper’s (Parry Shen) legal options, now that he has found out that the birth father didn’t know about the birth mother giving their baby up for adoption. Alexis asks Lucas, “Does the birth father know now?”

He still doesn’t know that the baby he was swapped for is Jonah Corinthos (Eric and Theodore). Getting Sam involved might bring up more truth than he’s prepared to handle! But what he’ll want is probably anything that would preclude Shiloh from fighting for custody as he tells her that her brother needs her help!

Meanwhile, Detective Harrison Chase (Josh Swickard) catches up with his girlfriend, Willow Tait (Katelyn MacMullen) as he asks her what happened after he left the Nurses’ Ball.

At General Hospital, Chase’s older brother Dr. Hamilton Finn (Michael Easton) talks to Curtis and Commissioner Jordan Ashford (Donnell Turner, Briana Nicole Henry) about the possibility of getting one of Ryan Chamberlain’s (Jon Lindstrom) kidneys for her transplant, and he advises that they can’t do anything without Ryan’s consent. Unfortunately, Ryan is conscious and not on life support so Dr. Kevin Collins (Jon Lindstrom) can’t give consent as Ryan’s next of kin.

Stepping back from her work is the last thing Jordan wants to do. But does she have a choice? @donnellturner1 #GH is brand-new and STARTS NOW on ABC! @Bri_Nic_Henry pic.twitter.com/ICIM0hl4GY

Meanwhile, also at GH, Ryan has an unexpected visitor; Franco Baldwin (Roger Howarth)! Franco is not happy as he reminds Ryan that it would have been Kiki Jerome’s (Hayley Erin) birthday! Maybe Franco will try to guilt trip Ryan into donating a kidney if he knows about him being a match for Jordan – good luck with guilt tripping someone with no conscience, Franco!