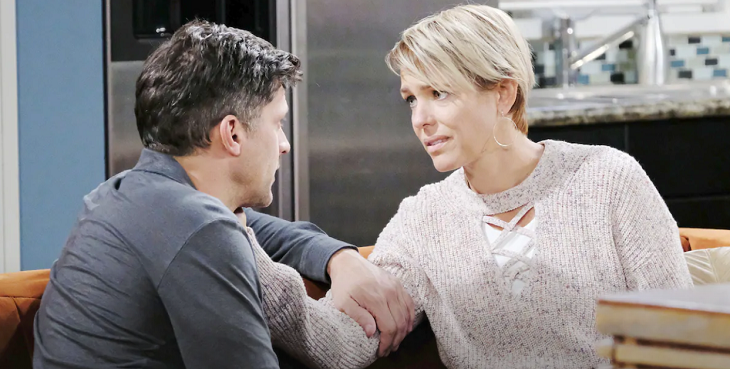 Days of Our Lives (DOOL)  spoilers tease that fakeNicole, otherwise known as Kristen DiMera (Stacy Haiduk) has come back to Salem with one goal in mind, other than unseating her half-brother Stefan DiMera (Brandon Barash) and taking over DiMera Enterprises; and that is getting herself into Brady Black’s (Eric Martsolf) bed and his heart!

Days of Our Lives viewers have suspected that the Nicole Walker (Adrienne Zucker) that showed up at Eric Brady’s (Greg Vaughan) doorstep wasn’t the real deal, and now she’s been revealed as Kristen in a Nicole mask.

Of course, as Days of Our Lives viewers know, she could run into some complications in her plans. For one thing, as Xander mentioned to her, maybe Brady will know she’s not really Nicole! However, in Tuesday’s episode, she had convinced Xander that it was not a worry since she’d gotten her huge Phoenix tattoo removed.

But something that happened right after Xander left her room at the Salem Inn might give Brady a little bit of a heads up if he gets past the idea that “Nicole’s” strange actions aren’t just because of grief for her presumed dead daughter, Holly Jonas (Scarlett and Harlow Mallory)!

Maggie Kiriakis (Suzanne Rogers) saw Kristen answer “Nicole’s” door at the Salem Inn, and then when she confronted her with it, having changed back into her mask, Kristen called her a lush and slammed the door in her face again, and Maggie will tell Brady about this!

DAYS Spoilers– Will The Brothers Fight For Nicole’s Love?

However, when Brady goes to the Salem Inn to investigate Maggie’s story, Kristen will immediately deflect and change the subject; moreover, Eric will already be there trying to warn “Nicole” about Xander having been caught with Holly’s autopsy report by Rex Brady (Kyle Lowder), and the suspicions that Eric, Rex and Sarah Horton (Linsey Godfrey) have about what Xander would want with the autopsy report!

So when Brady gets there, Kristen will stage an incident involving Eric that doesn’t portray him in a very good light, and this will, of course, be to bring out the hero out in Brady and prove to him that “Nicole” no longer loves Eric and wants Brady!

But will Brady fall for it, and more importantly, allow himself to fall for her? From his conversation about Maggie teaching him to love himself instead of looking for love and validation from woman after woman, it sounds like he learned an important lesson which may be invaluable in preventing another brother battle rather than starting one, and Brady and Eric might both start thinking with their heads instead of their hearts and smell a rat – a big blonde rat named Kristen!