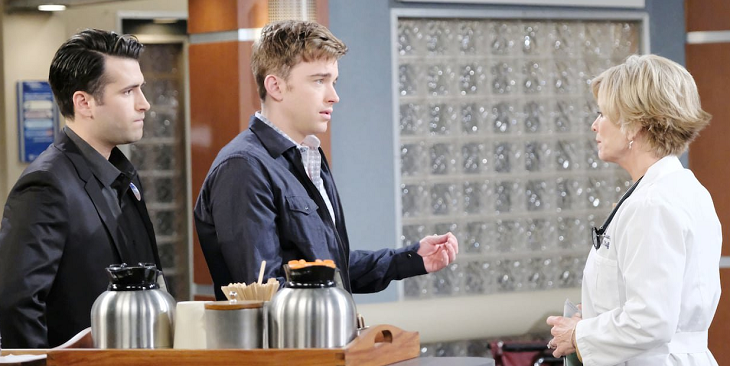 Days of Our Lives (DOOL) spoilers tease that Will Horton (Chandler Massey) and Sonny Kiriakis will soon get some terrible news. It seems that they have been on the receiving end of a steady stream of bad news for a while now. As DOOL viewers know, WilSon had their terrible ordeal with Leo Starke (Greg Rikaart), which took months to resolve. And as soon as they were rid of Leo, Will’s health took a turn for the worse.

Will has been in and out of the hospital dealing with what turned out to be a brain tumor. And even though the tumor is benign, it is still posing a big risk to his health. The tumor is positioned in an area of his brain such that an operation isn’t possible, and Will’s behavior has been affected. He goes through bouts where he can’t remember things, and he has angry outbursts toward his loved ones.

As DOOL viewers now know, the tumor is particularly dangerous because it was caused by Dr. Wilhelm Rolf’s (William Utay) serum, which Will was injected with last year in an effort to regain his memory. There is a lot that’s unknown about the serum, so treating the tumor is impossible without Dr. Rolf’s diary.

And so the race will be on to find the diary. John Black (Drake Hogestyn) will be on the case, but the diary will be hard to track down. As DOOL viewers know, the last we saw the diary, Xander Cook (Paul Telfer) had it, so it could be anywhere at this point. Meanwhile, the situation will start to look very bad for Will, whose condition will decline.

And soon, Will and Sonny will get terrible news from Kayla Johnson (Mary Beth Evans). It seems that after extensive research by Kayla, Rex Brady (Kyle Lowder), and Sarah Horton (Linsey Godfrey), they’ll be at the end of the road as far as what they can do for Will, and WilSon will have to face the fact that Will may die.

In the latest #DAYS, Will lashes out at Marlena.https://t.co/ZsCmioRrzb pic.twitter.com/0nQPZmZYSR

At this point, the family will decide that it’s time to fill in Will’s mom and dad on what’s going on. DOOL viewers will remember that Will didn’t want Sami DiMera (Alison Sweeney) or Lucas Horton (Brian Dattilo) to be told about his condition. But since things are getting dire, it will be time to call Sami and Lucas home to be with their son.

Days of Our Lives viewers can expect to see Sami and Lucas on canvas very soon, as they visit their son and try to support him during this difficult time. It certainly appears that Will is going to be at death’s door unless Dr. Rolf’s diary can be found in good time. Do you think John will be able to come through and save Will?

As always, more detailed spoilers and a full collection of pictures for the week in question will appear here on Hollywood Hiccups, where there will be more clues and hints over exactly what’s going on.  Stay tuned to Days of Our Lives and keep checking Hollywood Hiccups spoilers frequently for all the latest news, updates and developments!