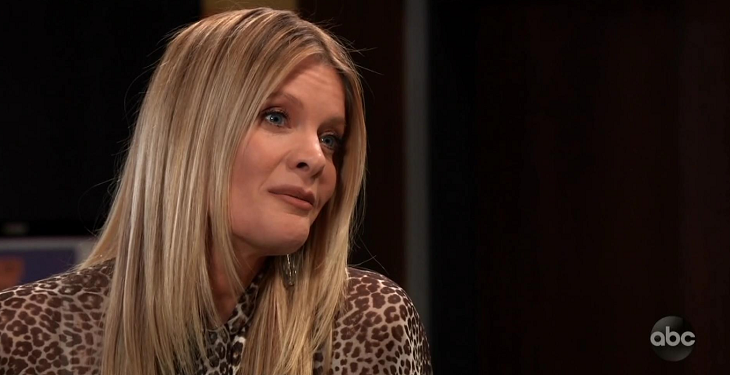 General Hospital spoilers tease that Nina Reeves (Michelle Stafford) will be met with a rude awakening this week! At the end of Wednesday’s episode,  she was shocked to see Jasper Jacks (Ingo Rademacher) in her office at Crimson, after Maxie Jones (Kirsten Storms) finding some shocking financial information about Crimson out earlier, which she had gone to investigate.

Nina finds Jacks, holding two glasses of champagne for celebrating with, telling her to say hello to the new owner of Crimson! Read below to find out what’s ahead on GH.

As General Hospital viewers know, Aurora Media, the parent company of Crimson, is owned by Drew Cain (Billy Miller) but he has said nothing about selling either the parent company nor Crimson. He’d want to leave the company to his daughter Scout Cain (Palmer and Poe Parker) when she grows up, and there were no indications in previous storylines that he needed to raise any money for he and Dr. Kim Nero’s (Tamara Braun) trip to Mount Kilimanjaro in Tanzania to scatter their late son Oscar Nero Quartermaine’s (Garren Lake Stitt) ashes there.

General Hospital Spoilers: Ryan Pushes Franco To The Point Of No Return — Reminds Kevin’s Twin Of His Serial Killer Past

There were some earlier spring spoilers about Drew making a business decision that would affect his family, but that storyline never played out on the air. If Drew were selling Crimson he’d want to give the Crimson employees and Nina a heads-up first!

General Hospital Spoilers– Did Jax Acquire Crimson Through A Hostile Take Over?

Everything about this purchase of Crimson and possibly Aurora Media by Jax smacks of his business as a corporate raider, and that this was a hostile takeover. For those General Hospital viewers who may not know how a hostile takeover works, it’s when a competing company buys out all the stock of a company it wants to eliminate as its competition, and sometimes the buyer disintegrates the competitor company, but other times the buyer supports it and no one loses their jobs and the buyer becomes richer.

The latter seems to be the case or Jax wouldn’t be letting Nina know he’s the new owner! Drew himself may be in for a rude awakening when he and Kim return to Port Charles and he finds himself minus a business!