The Bold And The Beautiful Spoilers: Friday, May 31 – Xander Presses Zoe For Beth Details – Steffy Grills Thomas On His Relationship With Hope 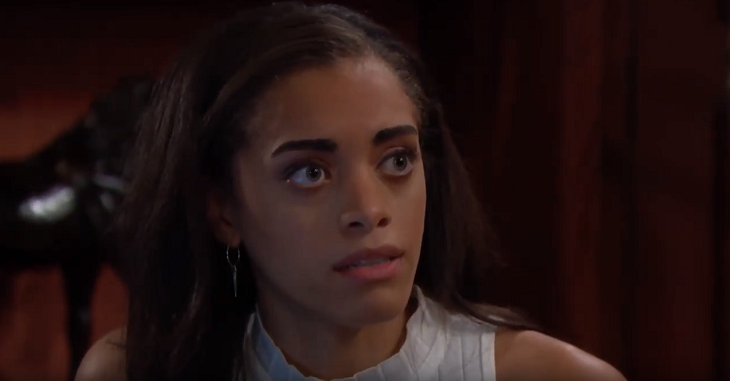 The Bold and the Beautiful (B&B) spoilers for Friday, May 31, tease that Xander Avant (Adain Bradley) will be on the warpath. As B&B viewers know, he’s just heard a private conversation between Zoe Buckingham (Kiara Barnes) and Florence “Flo” Fulton (Katrina Bowden), and he’s absolutely horrified. He heard Zoe refer to Hope Spencer’s (Annika Noelle) daughter as “still alive,” and he cannot believe what he’s heard.

An agitated Xander will pull Zoe aside for a private conversation. He’ll want some answers immediately, and of course, he’ll think that Hope should be told if it’s indeed true that her baby is alive and well. He’ll want to know where the baby is, why her existence has been concealed, and all sorts of other pertinent details.

As B&B viewers know, this is exactly what Zoe has been fearing for all these months. She wanted to keep the secret between as few people as possible, because if the truth comes out, then her father Reese Buckingham (Wayne Brady) would surely lose his medical license and get some serious jail time. Zoe will have to quickly weigh exactly how much she should tell Xander about what happened to Hope’s daughter and where she is now.

But it looks like Zoe will eventually give in and tell Xander what happened on Catalina Island and what her father did with Hope’s baby. Xander will be horrified by what he hears, and B&B viewers can expect a major argument over the terrible secret Zoe has been keeping. But the big question now is what Xander will do with the information he hears.

As B&B viewers know, Xander’s family is very close to the Forresters, the Logans, and the Spencers, and keeping this kind of secret from Hope and Liam Spencer (Scott Clifton) will be unimaginable to Xander. We’ll have to wait to see what he and Zoe decide to do going forward, now that Xander knows that Hope’s daughter is alive and well.

Meanwhile, on Friday’s new episode of B&B, Thomas Forrester (Matthew Atkinson) will find himself being grilled by his sister Steffy Forrester (Jacqueline MacInnes Wood). Steffy heard an incredible story from Liam about how Thomas was getting in Hope’s head and convincing her to become Douglas Forrester’s (Henry Joseph Samiri) new mother, and she’ll want to hear Thomas’ side of the story.

Flo and Zoe weigh the pros and cons of coming clean when they learn that Hope and Liam are divorcing. WATCH FULL EPISODE: https://t.co/oGb8SlObVD #BoldandBeautiful pic.twitter.com/YoE9BvwWXo

Thomas will likely put forth the same story that he told Ridge Forrester (Thorsten Kaye), about how he is just looking out for Douglas’ best interest, and that Liam belongs with his daughters rather than with Hope. In fact, it looks like Thomas will even insist that Hope made her own decision and that he was just being a supportive friend.

The Bold and the Beautiful spoilers also say that Thomas will get Steffy thinking about her past with Liam, so it looks like Thomas might manipulate his sister a bit, too. Thomas really knows how to work on a person’s deepest feelings and emotions, and it seems that Steffy will be susceptible to this, too.

Thomas will probably insist to Steffy that Liam belongs with her, as a full-time father to Kelly Spencer (Chloe Teperman and Zoe Pennington) and Phoebe Forrester (River Davidson and Madeline Valdez), and it looks like his words will have some effect on her, as upcoming B&B spoilers say that Steffy will soon spend some time reminiscing about her past with Liam.

Be sure to tune in on Friday to catch up on everything happening on B&B right now. Check Hollywood Hiccups often for updates, news, rumors, and spoilers!  As always, more detailed spoilers and a full collection of pictures for the week in question will appear on Soap Opera Spy, where there will be more clues and hints over exactly what’s going on.