The Young And The Restless Poll: Forgiveness On Adam’s Agenda – Calls It Even With Chloe When She Returns? Vote Now! 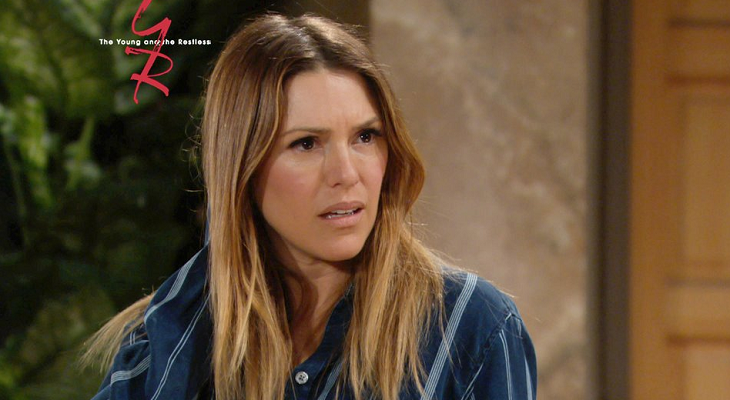 The new Adam Newman (Mark Grossman) appears to be very similar to the other versions of this character on The Young and the Restless. Always compelling, dark, but with a clear wisp of vulnerability present. And so that’s why forgiveness may be written in this time.

Before we address Chloe Mitchell (Elizabeth Hendrickson), the ‘Moustache’ must be twirled. Victor Newman (Eric Braeden) appears primed to help his son make contact with Chelsea Newman (Melissa Claire Egan) and Connor Newman (Gunner and Ryder Gadbois). Whether that happens, or not, a ‘Chadam’ family reunion feels inevitable.

Assume that Adam does reunite with his wife and first-born son. Surely Chelsea won’t be rushing to instantly forgive her former best friend. The head conk on the day of the proposed ‘Khloe’ marriage, which occurred upstairs at the Chancellor mansion, was followed by Chloe’s obviously failed kill attempt of Adam, which fully upended Chelsea’s life and that of her son.

Victor knows that Chloe is alive, but the rest of the soapy world believes she’s dead. His compassion for Bella Mitchell (Cali May Kinder) enabled Chloe, Kevin Fisher (Greg Rikaart), and Bella to start a new life out west. As far as the viewers know, even Esther Valentine (Kate Linder) isn’t aware that her daughter is alive.

The Chloe reveal is bound to happen, considering Egan and Rikaart’s already announced return to Y&R’s cast. With that, an opportunity will be open to Adam. Rather than seeking revenge against Chloe, he’ll have a chance to make amends, or at least call it even with her.

Young And Restless Spoilers– Can Chloe And Adam Call A Truce?

Delia Abbott’s (Sophie Pollono) accidental death was just re-purposed in Adam’s memory when he regained it. The one way for Chloe to reclaim her life would be if Adam forgives what she purposely did in September 2016, when Justin Hartley’s edition of Adam appeared to be blown to bits.

Adam is Victor’s son, meaning that some calculated outcome is often included in any appearance of goodwill. But just like his father, Adam could take pity on Bella and forgive her mother.

So, will Adam call it even with Chloe when she returns? Please vote in our poll below!