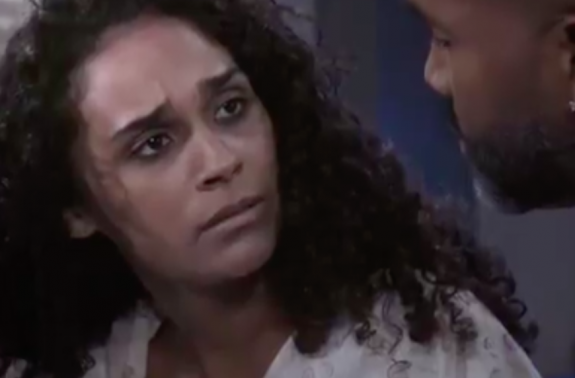 General Hospital spoilers tease that Monday, June 3rd’s episode will be full of drama and excitement for General Hospital viewers as always, as some Port Citizens come up with plans and others receive warnings!

First, Ava Jerome (Maura West) who made bail at her arraignment for the attempted murder of Ryan Chamberlain (Jon Lindstrom), her daughter’s killer, is at her daughter Kiki Jerome’s (Hayley Erin) grave to tell her “Happy Birthday”. She looks around as she senses someone’s behind her; according to other General Hospital spoilers, her old friend and former lover Franco Baldwin (Roger Howarth) also joins her at the grave.

Next, we see Michael Corinthos (Chad Duell) talking to his friend with benefits Sasha Gilmore (Sofia Mattsson) and warns her that things are about to become really complicated! General Hospital viewers will wonder what that’s all about! It could be about Nina Reeves’ (Cynthia Watros taking over the role Monday) upcoming wedding to Valentin Cassadine (James Patrick Stuart).

Elsewhere, Valentin is not happy with Jasper Jacks (Ingo Rademacher) taking over Crimson, and has a proposal for Sonny Corinthos (Maurice Benard) who doesn’t like Jax either! Elsewhere, Jax tells someone “You give me no choice!” Perhaps that’s about Nina needing more time to work out the budget changes because she needs the time to get married, and Jax has to pick up the slack as he mentioned in Thursday, May 30th’s episode!

At General Hospital, Jordan Ashford (Briana Nicole Henry) is obviously getting weaker as she barely whispers something to someone that sounds like, “Say goodbye for me”! In Ryan’s room, Dr. Kevin Collins (Jon Lindstrom) warns his twin that he WILL pay for the things he has done!

"This is life and death." #GH pic.twitter.com/VbzcTWE7ub

GH Spoilers: Dr. Hamilton Finn And Curtis Ashford Come Up With A Plan

Elsewhere in General Hospital, Dr. Hamilton Finn (Michael Easton) and Curtis Ashford (Donnell Turner) have come up with a plan to harvest a kidney from Ryan, undoubtedly with Kevin having to sign as next of kin. Finn tells Curtis, “Once he’s under the knife, we make sure he never wakes up!”

General Hospital viewers can be sure Finn means keeping him under anesthesia or possibly a coma without affecting his kidneys! He can bring him out of it again once the kidney’s been transplanted in Jordan!