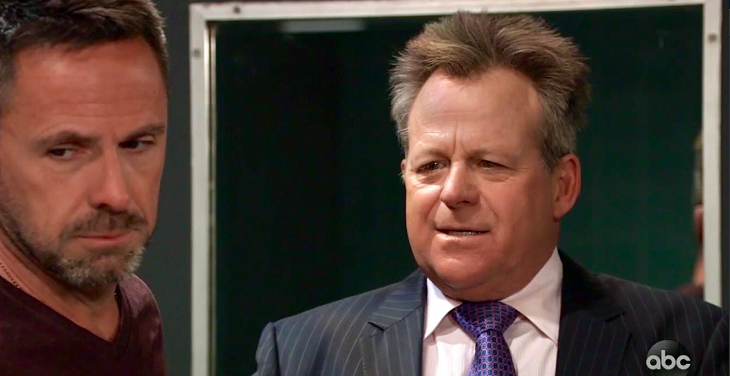 Technically, in the real legal world, the plea of not guilty by reason of insanity means that the person making the plea is mentally deficient rather than mentally ill, that they do not understand the difference between right and wrong and did not understand the consequences of their illegal act. But in TV land and soapland, it usually is used for a person being either insane or so overcome by emotion, usually grief, that they lost control and committed whatever the act was that they are being tried for.

Scott will likely reiterate that Ryan used Ava as his alibi by seducing her on the night he killed her daughter Kiki Jerome (Hayley Erin) and that Ava is still in the grieving process, which she undoubtedly is and was overcome by grief when she stabbed him, not revenge!

Margaux will likely go for it, wanting to save face for shutting down the Ryan Chamberlain investigation to begin with, and a woman in Canada being killed because of her error. She felt justified at the time but then went beyond her authority in issuing a shoot to kill order to the police when sending them to recapture Ryan when he had Ava (or actually, she had HIM) in the cabin.

Of course, as General Hospital viewers know, Mayor Laura Webber (Genie Francis) overrode that order when she found out Ryan might be a donor match for Commissioner Jordan Ashford (Briana Nicole Henry) who needs a kidney donation immediately to save her life!

Ava (literally) stabbed Ryan in the back… but was she able to kill him? Tune into a thrilling, new #GH – STARTING NOW on ABC! @MauraWest pic.twitter.com/nHfqStSiCO

General Hospital  Spoilers– What Punishment Will Ava Get?

Ava may not get off exactly scot-free with a temporary insanity plea, but she won’t go to prison. She might have to spend a little time at Ferncliff or possibly Shadybrook and maybe have to do some probation after she’s released, but that’s better than an attempted murder rap and a possible taxpayer expense paid vacation at Pentonville!