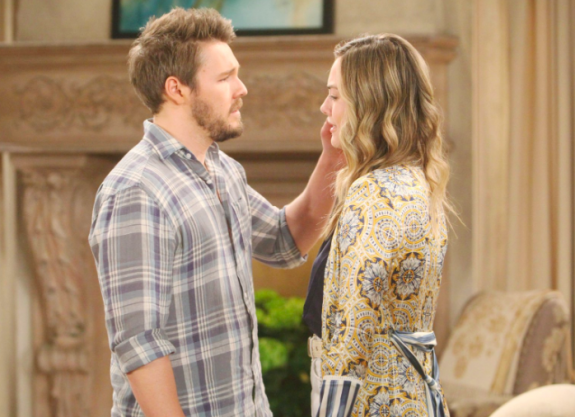 The Bold and the Beautiful recap for Friday, May 31st finds Liam Spencer (Scott Clifton) and Hope Logan (Annika Noelle) pulling the plug on their marriage, but without one last surprise.

It begins at Forrester Creations, where Xander presses Zoe to tell the truth about what he just overheard in her conversation with Flo Fulton (Katrina Bowden). He heard the words ‘Baby Beth’ and wants to know what Zoe is hiding about Hope and Liam’s baby.

Bold And The Beautiful Spoilers: Baby Beth Is Still Alive

When he asked her why did she say that Beth is alive, Zoe couldn’t help but blurt out that yes, the baby is alive. Zoe then tells him the story of what happened that night in Catalina Island and how her father was involved in the entire mess. Zoe also tells him that Xander knows the person that is raising Baby beth. Xander is speechless.

Zoe tries to defend herself and says that she couldn’t do anything about it, because it was all done behind her back. Xander then puts the pieces together and realizes that Steffy’s baby Phoebe is Beth. Xander is now determined to tell Hope the truth.

B&B Spoilers: “Lope” Have One Last Night As A Married Couple

At the cabin, Liam and Hope are having one last night as a married couple. He insists they celebrate the love they had. Hope says that if Beth were alive, they wouldn’t be doing this. They relive some of the best memories they had as a married couple. Hope admits that she wanted a family with Liam. They slow dance and kiss.

Thomas and Douglas Forrester (Henry Joseph Samiri) arrive at Steffy’s cliffhouse. Douglas mentions something about how Steffy’s girls are so lucky to have a mother. She takes him to the next room so he can play with her daughters. Thomas takes a look at Steffy and Liam’s wedding photo.

Bold And The Beautiful Spoilers: Thomas Forrester Wants To Play A Role In Douglas’ Life

Thomas talks about how he would like Hope to play a big role in Douglas’ life. He tells Steffy all about how great Hope has been with Douglas so far. Thomas then tells Steffy that he loves Hope while also hinted that his sister should give Liam another chance. Steffy is still unsure if this is the right thing to do.