The Bold and the Beautiful Spoilers: Monday, June 3: Zoe Struggles To Keep Xander From Spilling The Secret – Steffy Reminisces About Liam 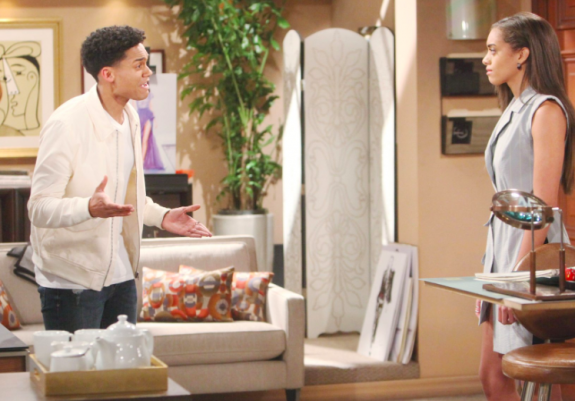 The Bold and the Beautiful spoilers for Monday, June 3, tease that Zoe Buckingham (Kiara Barnes) will have a real problem on her hands.

Xander Avant (Adain Bradley) has just pulled the truth out of her about Hope Spencer (Annika Noelle) and Liam Spencer’s (Scott Clifton) daughter. As B&B viewers know, their daughter Beth Spencer is alive and living as Phoebe Forrester (River Davidson and Madeline Valdez), and now Xander knows it.

Zoe spilled the story about how her father Reese Buckingham (Wayne Brady) led Hope and Liam to believe that Beth died but actually arranged for her to be adopted to Steffy Forrester (Jacqueline MacInnes Wood). Xander was horrified to hear the story, and he’s reeling from the revelation.

The Bold And The Beautiful Poll: Is Wyatt Moving Too Fast With Flo? Vote Now!

The Bold and the Beautiful spoilers indicate that Xander will want Zoe to immediately go and tell Hope and Liam that their daughter is alive. Zoe will have to think quickly if she’s going to prevent that from happening, and she’ll probably urge Xander to stop and think before he does anything drastic, like spill the truth to anyone.

Zoe will probably argue that there are a lot of lives on the line if the truth comes out. She’ll likely tell Xander about how Florence “Flo” Fulton (Katrina Bowden) is mixed up in the whole mess, and she’ll point out how both her dad and Flo could end up getting significant jail time if the truth were to come out. Plus, Zoe could be facing obstruction charges, too.

B&B Spoilers: Not Everyone Will Find Out The Secret Immediately

It looks like Zoe will be able to talk Xander down a bit, as B&B spoilers say that Hope, Liam, and Steffy won’t learn about the truth for quite some time. But that’s not going to diminish Xander’s anger any, and he’ll likely be quite upset with Zoe over keeping this secret.

Meanwhile, on Monday’s new episode of B&B, Thomas Forrester (Matthew Atkinson) will get manipulative with his sister. He and Steffy will continue their visit at the cliff house. But Thomas will have a clear agenda; he’ll want Steffy to realize that she still wants Liam, so that he can get Hope free and clear of her soon-to-be ex-husband.

Do you think Xander will tell the truth? #BoldandBeautiful pic.twitter.com/SXppW4Ydzo

Bold And The Beautiful Spoilers: Thomas Forrester Still Wants Hope Spencer To Be His

All Thomas really wants is for Hope to ultimately be with him and to become a doting stepmother to Douglas Forrester (Henry Joesph Samiri). Hope is certainly on board with being a mother-figure to Douglas, but Thomas figures that he needs to ensure that Liam moves on with Steffy, so that Hope is freed up for him.

So, Liam will work on Steffy a bit, cajoling her to remember all of the good times she had with Liam back in the day. Look for some big-time reminiscing on Monday’s episode of B&B, with Steffy thinking back to some of the most poignant “Steam” moments from the past.