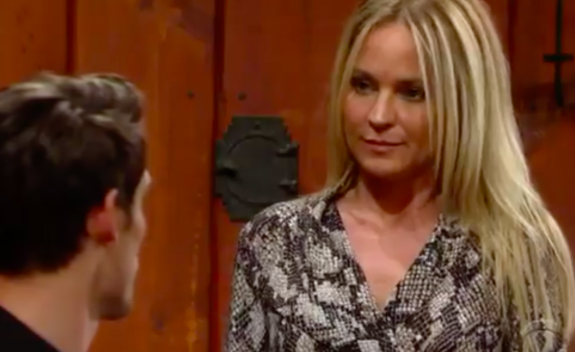 The Young and the Restless spoilers for Monday, June 3, tease that Billy Abbott (Jason Thompson) and Victoria Newman (Amelia Heinle) will happily put together the invites for their upcoming recommitment ceremony while discussing Adam Newman (Mark Grossman). They’ll wonder about what Adam’s next move will be.

Meanwhile, at the tack house, Sharon Newman (Sharon Case) will tell Adam that Chelsea Newman (Melissa Claire Egan) returned her call, but she has remarried and her new husband adopted Connor Newman (Michael and Nolan Webb). Furthermore, they have new identities and Chelsea refuses to say where they are. Adam will be upset, and neither Sharon nor Adam will realize that Rey Rosales (Jordi Vilasuso) is listening outside the door.

Next on Y&R, Lauren Baldwin (Tracey Bregman) will argue with Phyllis Summers (Gina Tognoni) at Crimson Lights about her knockoff site. Lauren will tell Phyllis that if she keeps the site up, then she and Michael Baldwin (Christian LeBlanc) will stop protecting her.

Young And The Restless Spoilers: Traci Abbott Works On Her Book

Meanwhile, on the patio, Traci Abbott (Beth Maitland) will work on her book, and she’ll get carried away, as “her” character will tell Cane Ashby’s (Daniel Goddard) character that she’s in love with him, and the two characters will kiss. A startled Traci will snap out of it and delete the scene from the book.

At Jabot, Jack Abbott (Peter Bergman), Kyle Abbott (Michael Mealor), and Summer Newman (Hunter King) will discuss the knockoff site, and Summer will worry that Phyllis is responsible for it. Lauren and Billy will arrive, and together they’ll all launch the Jabot Collective. They’ll plan to celebrate later at the Abbott estate.

Next on Y&R, Sharon will arrive home to find Rey, who will fill her in that he saw her with Adam at the tack house. Rey will hope that Sharon doesn’t trust Adam because he might manipulate her. Rey will go to Dark Horse, and when he returns, Sharon will let him know that he has nothing to worry about with Adam and her.

At Society, Phyllis, who has had too much to drink, will be upset over the Jabot launch and will lash out at Billy. They’ll argue, and Billy will let her know that Jack thinks she’s behind the knockoff site, and after all, she did take money from him to start a company.

Next on Y&R, at Newman Enterprises, Victor Newman (Eric Braeden) and Adam will discuss Christian Newman (Jamie and Alister Tobias), and Adam will let it be known that Christian is his son, and no one is going to take that away from him. They’ll also discuss the news about Chelsea, and ultimately Victor will agree to look into Chelsea’s current situation.

Adam will also run into Victoria at the office, and he’ll let her know that he’s going to use the money she gave him to start a new venture of his own. Victoria and Victor will talk afterwards, and they’ll bicker about Adam per usual.

Adam’s as ruthless as ever and will do whatever it takes. 👊 Make sure to tune in to #YR this week! pic.twitter.com/ShMPEbJges

At the Abbott estate, everyone will gather to elaborate the Jabot Collective launch. Summer will bring the handsome Theo Vanderway (Tyler Johnson) and another influencer with her. Then Phyllis will crash the party, drunk, to taunt everyone about the launch. Later, Lauren will admit to Jack that Phyllis was behind the knockoff site.

Back at the tack house, Adam will get a text indicating that someone found what he was looking for, and Adam will text the person back to stay on it.

Young And The Restless Spoilers: Phyllis Summers Swerves Off The Road

Finally, on Monday’s episode of Y&R, a still-drunk Phyllis will swerve off the road, and it turns out that the other driver she crashes into is Adam.