Days Of Our Lives Rumor: Dr. Rolf: Dead Or Alive? He’s Faked His Death Before! 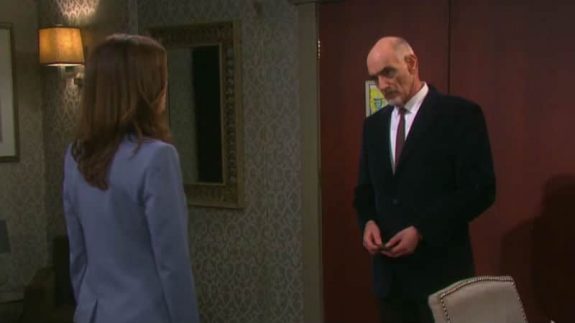 Days of Our Lives spoilers tease that Dr. Wilhelm Rolf (William Utay) could be dead and possibly that Kristen DiMera (Stacy Haiduk) could have been the culprit!

In Tuesday, May 28th’s episode, as Xander Cook Kiriakis (Paul Telfer) discussed how Kristen escaped the warehouse fire and that he had thought she was dead, she seemed to imply that Rolf was dead and she now has all his serum materials and notes! Xander looked confused! Xander, however still had Rolf’s diary as far as he knew when he left Salem the last time!

Days of Our Lives Spoilers: Can Will Horton Be Saved?

As Days of Our Lives viewers will recall, the warehouse fire started when Rolf himself accidentally knocked over some beakers in his lab, which exploded, and the fire spread. Many were presumed dead, including Kristen herself, Rolf, Xander, Andre DiMera (Thaao Penghlis), Vivian Alamain (then Louise Sorel, to be reprised by Robin Strasser in September), and others, including Nicole Walker (Adrienne Zucker) and while Sami Brady DiMera (Alison Sweeney) got EJ DiMera (then James Scott) out, Brady Black (Eric Martsolf) and Eric Brady (Greg Vaughan) were busy trying to rescue Nicole and baby Holly Jonas (Scarlett and Harlow Mallory).

Days Of Our Lives Spoilers: Who Has Baby Holly Jonas

They succeeded with Holly but not with Nicole, who Kristen seemed to indicate was dead, but if she is, who has Holly? Xander is not that heartless; he would have delivered Holly to someone who would love and take care of her and who she wouldn’t be scared of! Jack Deveraux (Matthew Ashford) was also there and as Days of Our Lives viewers know, either Xander rescued him or he found Jack outside the building, depending on whose story you believe!

However, longtime Days of Our Lives fans will recall that Rolf has played dead and faked his death and managed to resurrect himself several times, and should Kristen have only thought she left him dead in the lab or elsewhere in the warehouse, he could easily pop up in the next few months!

Although Days of Our Lives powers-that-be have not released any news about Rolf’s reappearance, it would be a perfect time for him to do so, because if anyone could save Will Horton (Chandler Massey), Rolf could! Stay tuned to Days of Our Lives and keep checking Days of Our Lives spoilers frequently for all the latest news, updates and developments!