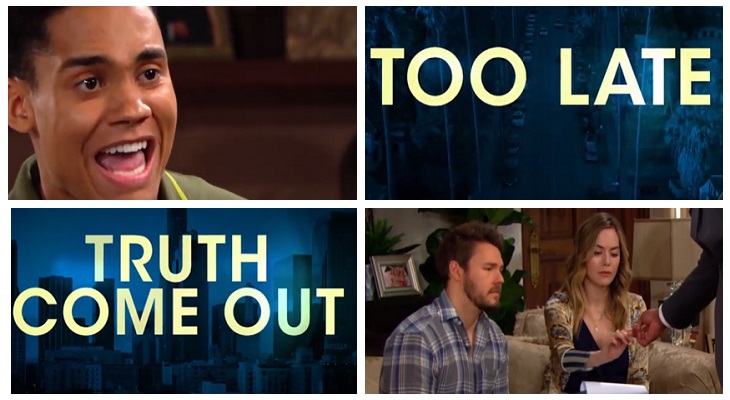 The Bold and the Beautiful (B&B) spoilers tease that major drama is ahead during the week of June 3. Thomas Forrester (Matthew Atkinson) will force his sister, Steffy Forrester (Jacqueline MacInnes Wood) to remember the good times with Liam Spencer (Scott Clifton). Also, Flo Fulton is guilt ridden after she hears that Hope Logan (Annika Noelle) and Liam are ending their marriage.

On Friday’s episode, Steffy put Thomas on blast for manipulating Hope. B&B spoilers state that Thomas will bring up an important point, Steffy and Liam were happy together. It forces her to remember their good times and consider if she would like to rekindle the romance with him.

However, it might not be that easy. Across town, Liam is still reeling over his marriage ending. He doesn’t understand why Hope feels like this is the right thing to do. He wonders if Thomas put this in her head and begins to plot a way to convince her it’s a mistake.

Xander Avant (Adain Bradley) overheard Zoe Buckingham (Kiara Barnes) and Flo Fulton (Katrina Bowden) talking about the Beth secret. He is blown away by the fact that Beth is alive. He feels that Hope and Liam should know and he storms off to tell them.

Meanwhile, Flo cannot help but feel guilty over Lope’s divorce. B&B spoilers state that she feels that if she would have Beth now, the couple would be happy. And, she is probably right.

Zoe doesn’t want to think about it. She muses that they are forever bonded because of the secret and she wonders if Xander will tell Hope the secret. Both women appear on edge as they wait to see how it all plays out.

Across town, Liam and Hope are about to sign the legal documents with Carter that would end their marriage. Just as they were about to sign, Xander interrupts and says he needs to speak to Lope before they make the divorce official.

Will Xander reveal the truth about Beth? Don’t forget to come back later for more The Bold and the Beautiful (B&B) spoilers, news, and casting updates!