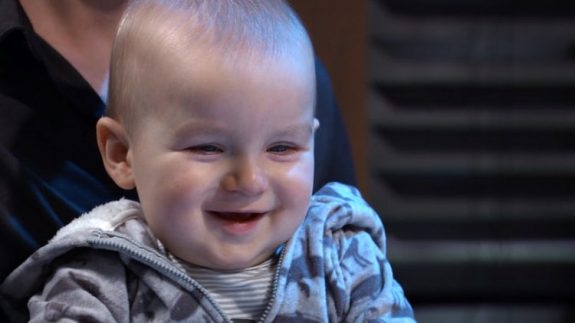 General Hospital spoilers tease that the attempt to protect Baby Wiley Cooper-Jones (Eric and Theodore) may in fact expose the secret that Brad Cooper (Parry Shen) has been trying so hard to keep secret; that little Wiley is really Jonah Corinthos!

However, Sam is thorough, and even though Julian wanted the adoption records destroyed, she knows that the baby’s birth records with blood type, footprints and handprints may still be in General Hospital. As General Hospital viewers know, the original Wiley died and the baby that Brad and Lucas actually have is Jonah.

The original Wiley’s birth record may still be at GH. Original Wiley was presumably born at GH since the other hospital, Mercy Hospital was not mentioned in the episode, but his death record of course would be under Jonah Corinthos because of the baby swap.

General Hospital viewers would think with Brad working in the hospital he could have some access to the records room and be able to cover the paperwork tracks, but he was so upset over original Wiley’s death he may not have thought to make the records match!

By now, all the records will have been filed with the Bureau of Vital Statistics, likely in the New York state capitol of Albany, so there will be those records that Sam will have to track down too but she’ll likely start at GH for the originals.

Julian wants to her destroy or at least redact any paperwork trail, so in the process she may find the truth of the baby swap and that the prints match between Wiley’s birth and Jonah’s death if someone forgot a step in altering Wiley’s original birth record! Stay tuned to General Hospital and keep checking General Hospital spoilers for all the latest news, updates and developments!