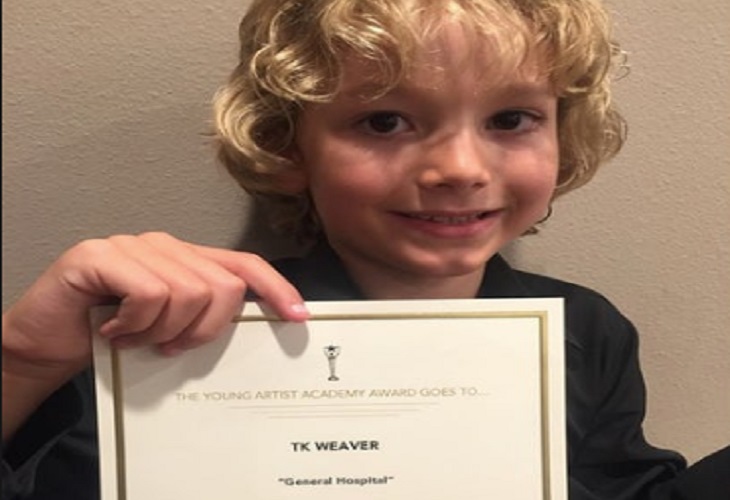 General Hospital spoilers reveal that TK Weaver is out as Danny Morgan, having been a victim of Soap Opera Rapid Aging Syndrome and replaced with another young actor who General Hospital powers-that-be haven’t even revealed the name of!

The replacement made his first appearance on Friday, May 31st’s episode! However, young TK was not totally blindsided although he was very disappointed to hear he was being replaced. TK tweeted that he has known for a couple of weeks so apparently since General Hospital films four to six weeks ahead, the new actor had actually taped his first scenes before TK was told!

TK was actually brokenhearted since he will miss his TV family greatly! He loved his time at General Hospital and wished the new Danny well and hopes the fans love him also. He also reached out to his TV mom and dad via Twitter and his TV uncle.

To Kelly Monaco, who plays his mother Sam McCall, he called her the “most beautiful and classiest set mom a kid could ever ask for”, and thanked TV dad Steve Burton, who plays Jason Morgan for calling him to make sure he was okay! Steve wanted to make sure that TK knew he hadn’t done anything wrong and that the recast was not his fault. He also noted that his TV uncle, Billy Miller who plays Drew Cain is a great advice giver, even offering to come to his house and give him a big bear hug if he ever needs one!

Billy Miller isn’t a big social media guy, but Kelly Monaco promised to show TK’s post to Billy where he tweeted about him, and both Kelly and Steve sent some positive, caring tweets back to TK and gave him some encouragement as well.

Steve Burton, who is a father himself obviously feels fatherly towards his former TV son and all three, Steve, Billy and Kelly will undoubtedly keep up with young TK and keep up the encouragement and good words as he pursues other opportunities in the future. Stay tuned to General Hospital and keep checking General Hospital spoilers frequently for all the latest news, updates and developments!