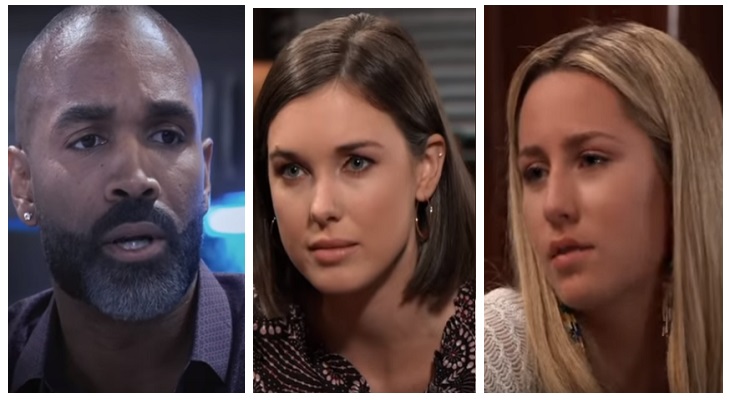 Monday, Curtis Ashford (Donnell Turner) is willing to risk it all as he, Dr. Kevin Collins, (Jon Lindstrom) and Dr. Hamilton Finn (Michael Easton) brainstorm to see how they can get a kidney out of Ryan Chamberlain (Jon Lindstrom) to save Jordan Ashford’s (Briana Nicole Henry) life.

In Monday’s GH preview Finn suggests to Curtis “making sure that Ryan doesn’t wake up” with the implication that maybe he could give him a knock-out shot that could possibly simulate a coma; then Kevin could sign the permission to take the kidney as his next of kin. Meanwhile, Franco Baldwin (Roger Howarth), who recently got a commendation for helping expose Ryan as the serial killer, visits Kiki Jerome’s (Hayley Erin) grave.

General Hospital spoilers tease that Tuesday, Stella Henry (Vernee Watson) pleads her case with the serial killer and tries taking her shot at convincing Ryan out of a kidney for Jordan after he gets the fear of God, or at least the fear of death, in him after developing mysterious seizures! Maybe someone tried to give Ryan a dose of his own medicine?

Meanwhile, Maxie Jones (Kirsten Storms) is determined to help her bestie Lulu Falconeri (Emme Rylan) with her lonely life since her husband Dante Falconeri (Dominic Zamprogna) left again, this time to get brainwashing and PTSD therapy after being on a several months long mission with the WSB.

Thursday, Jordan wonders about Ryan; could she be wondering if she’s getting his kidney and if he made it through surgery, or is she wondering if he’s still trying to plea bargain with it? Meanwhile, Julian Jerome (William DeVry) warns Willow about Shiloh; possibly he is back out of General Hospital after Jason Morgan (Steve Burton) had thrown him down the stairs of the lighthouse in the process of rescuing Sam McCall (Kelly Monaco) from him.

Friday, Sasha Gilmore (Sofia Mattsson) makes a date with Michael Corinthos (Chad Duell) and Jasper Jacks (Ingo Rademacher) defends his motives in moving to Port Charles and buying half of Crimson, probably this time to Valentin Cassadine (James Patrick Stuart) who doesn’t like either situation; Sasha getting too close to Michael and Jax getting too close to Nina Reeves (Cynthia Watros)!