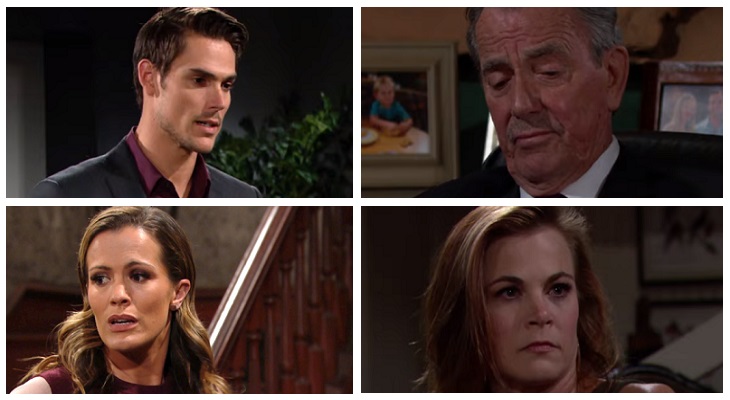 The Young and the Restless (Y&R) spoilers for the week of June 3 tease big drama is headed to Genoa City. Victor Newman (Eric Braeden) will have to answer several questions this week.

And, Phyllis Abbott (Gina Tognoni) will regret telling Adam Newman (Mark Grossman) so much inside information, but she will not be able to walk away. Plus, Victoria Newman (Amelia Heinle) and Billy Abbott (Jason Thompson) hold a recommitment ceremony with all their loved ones in attendance. Here’s what’s coming up on Y&R.

It won’t be a good week for Victor. First, Nikki Newman (Melody Thomas Scott) will drill him for more information after she learns something is wrong with his health. He will promise that he is fine and he’s handling the health crisis, but Nikki will want more information.

Later in the week, Victor will learn that Adam tracked down Chloe Mitchell (Elizabeth Hendrickson). He will have to answer some uncomfortable questions as he admits he not only knew Chloe faked her death, but he helped her do it.

And, supposedly, all this information comes to light after Rey Rosales (Jordi Vilasuso) gets a tip. Of course, he will tell this scoop to Nick Newman (Joshua Morrow), who will be stunned to learn Chloe is not dead.

Young And The Restless Spoilers – Phyllis Teams Up With Adam

Adam offers to drive Phyllis home after seeing her drunk at the Society. On the way home, they get into a fender bender. He decides to take her to his place to sober up. She is angry and she won’t stop talking about her anger with Jack Abbott (Peter Bergman) That’s when Adam asks her if she wants to team up to destroy Genoa City.

Of course, Phyllis will agree in her drunken state, but will she change her mind. And what kind of info can Phyllis give him to have a leg up against Nick?

As a way of announcing their partnership, Adam and Phyllis decide to crash Billy and Victoria’s commitment ceremony. To say the family was shocked to see them together is the understatement of the year. It will get interesting with them in the days ahead with Phyllis and Adam working together.

Later in the week, Sharon Newman (Sharon Case) will tell Adam a message from Chelsea Newman (Melissa Claire Egan). Is it what he wants to hear?

Don’t forget to come back later for more The Young and the Restless (Y&R) spoilers news, and casting updates!