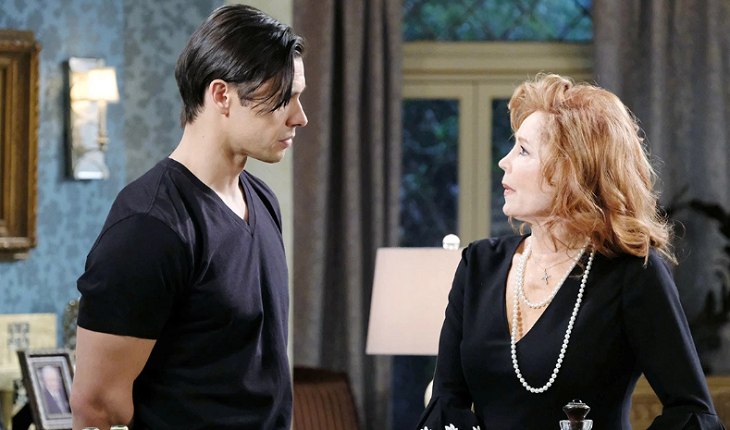 Days of Our Lives (DOOl) recap for Monday, June 3, 2019, reveals Gabi Hernandez (Camila Banus) calls Kate Roberts (Lauren Koslow) for advice about Stefan Dimera (Brandon Barash) and he hears her on the phone.

Stefan blames Gabi for Chloe Lane (Nadia Bjorlin) finding them together. Gabi asks if Stefan came by to yell at her and accuses him of wanting more. Stefan says he came to tell Gabi it’s over between them. Stefan apologizes to Gabi and promises to see her tomorrow.

Days of Our Lives Julie Williams (Susan Seaforth Hayes) and Chloe Lane clash over napkins at Doug’s Place. Eve Deveraux (Kassie DePaiva) and Jack Deveraux (Matthew Ashford) show up at Doug’s Place. Julie tries to throw them out, but Chloe disagrees. Chloe blames Eve for getting hurt by Stefan.

Julie tells Jack how much he is hurting Jennifer Horton (Melissa Reeves). Julie claims Jennifer was trying to knock some sense into Jack. Jack brings up the memory, Julie thinks the hit in the head helped. Jack says the voters in Salem prove Julie wrong, she disagrees. Eve starts to tell Chloe about her dilemma over Will, but Jack interrupts. Rex Brady (Kyle Lowder) bumps into Chloe in the park, and they talk.

Days Of Our Lives Spoilers: Will Could Die Within Days If Dr. Rolf’s Diary Isn’t Found

Days of Our Lives Maggie Kiriakis (Suzanne Rogers) is caught drinking by Xander Cook (Paul Telfer). Maggie tells Xander she just buried her granddaughter. Xander wants to have a drink with Maggie; she runs out claiming to be sick. He gets Maggie a glass of water and offers her melted ice cream. Xander asks Maggie how much she has had to drink; she doesn’t know. Maggie tells Xander she hadn’t had a drink in more than 30 years until today.

Maggie tells Xander that she saw Kristen Dimera (Stacy Haiduk) at Nicole’s apartment. Xander tries to convince Maggie that she imagined seeing Kristen. Xander doesn’t want to leave Maggie alone and tells her about his mother. Maggie connects with Xander over the loss of their parents. Xander says his mom used to take him for ice cream and to the beach, but he hasn’t heard from her in years. Xander used to wish that Victor Kirakis (John Aniston) would come and save him and his mom. Brady Black (Eric Martsolf) walks in to find Xander and Maggie asleep on the sofa.

Days of Our Lives Rex and Sarah Horton (Linsey Godfrey) have no luck finding anything on the formula. Sarah is fascinated by the mask protocol. Rex tells Sarah how Andre Dimera used the mask to frame Roman years ago. Sarah wonders if Eric Brady (Greg Vaughan) is OK since he hasn’t returned from visiting Nicole Walker (Arianne Zucker).

Eric arrives home and says seeing Nicole was a disaster. Eric tells Sarah he was trying to warn Nicole. Nicole blames Eric for Holly Jonas’ (Harlow and Scarlett Mallory). Eric tells Sarah about Nicole’s accusations. Eric almost didn’t recognize Nicole by looking in her eyes. Sarah tells Eric that he and Nicole need each other. Sarah offers to make coffee and discusses Rex’s things from his time with Dr. Rolf (William Utay).

Days of Our Lives Nicole accuses Eric of attacking her and throws him out of the apartment. Nicole throws Eric out and never wants to see him again. Brady Black tells Eric he needs to leave. Nicole hugs Brady and claims that Eric was making no sense when talking to her. Brady tells Nicole that Eric would never hurt her and defends him. Brady also informs Nicole that Maggie claims that Kristen opened her door earlier.

Nicole tells Brady about Maggie having vodka at the Brady Pub. Nicole claims that Brady was the only one to look after Holly and she will never forget that. Eric tells Nicole she belongs with Eric and needs to stop pushing him away.

Days Of Our Lives Rumors: Nicole and Holly On Xander’s Island For Safekeeping? https://t.co/SmY1lGBRX6 pic.twitter.com/4jcZr2aWt7

Nicole wonders why Brady is so loyal to Eric. Brady tells Nicole he will always be there for her, but he and Eric have reached a truce. Nicole tries to get Brady to stay, he refuses. Kristen tears off her Nicole mask and trashes her room, vowing to have Brady in the end.