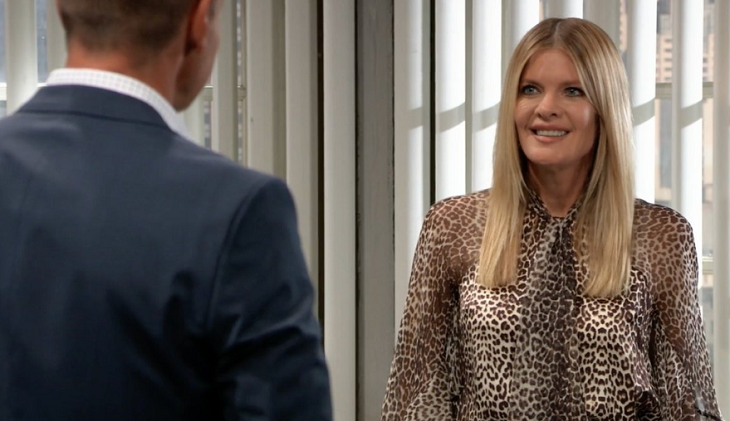 The two had started this discussion on Friday’s episode when they were interrupted by Nina’s fiancé Valentin Cassadine (James Patrick Stuart) walking into the Crimson office. Valentin wasn’t real happy about Jasper buying Crimson and putting in so much hands-on time in the Crimson office with Nina!

Nina told Jax that she needed more time on the project because she was getting married, but it sounds like Jax might be continuing to push the envelope for her to get the project completed, possibly suggesting Nina even postpone her wedding.

Nina is not going to like that, and Valentin isn’t too keen on Jax anyway. In the General Hospital preview for Monday, he is seen sitting with Sonny Corinthos (Maurice Benard) wanting to talk to him about Jax! Valentin apparently knows that Sonny doesn’t like Jax either and wants to plot against him in concert with Sonny!

Nina may feel some hot attraction to Jax, but General Hospital fans can tell that he’s rapidly wearing out his welcome and tamping down any flames of attraction in Nina by taking away her autonomy in running Crimson!

Nina rebuilt Crimson practically from the ground up when she took it over from Julian Jerome (William DeVry), who figured she’d ruin it and he could use it for a tax loss, but she did the exact opposite and made it a success.

So naturally she doesn’t like Jax thinking he can just come in and start cutting corners financially and expect her to adjust when Crimson has been in the black with her running things, just to put more money in Jax’s already deep pockets.

She’ll probably have something to say to Drew Cain (Billy Miller) as well when he returns from Tanzania after he and Dr. Kim Nero’s (Tamara Braun) trip to scatter Oscar Nero Quartermaine’s ashes, for not giving her a heads-up.

He apparently had made this deal with Jax several months ago, since he mentioned a large cash influx to Curtis Ashford (Donnell Turner) and offered to pay Jordan Ashford’s (Briana Nicole Henry) medical bills!

General Hospital viewers aren’t sure whether to expect a triangle or a triage with Nina, Jax, Valentin, and Sonny all conspiring!