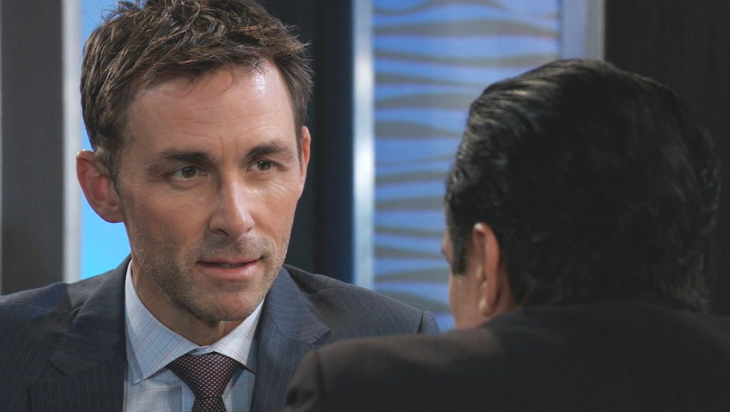 Michael tells Sonny he needs to calm down, Jocelyn Jacks (Eden McCoy) needs her father. Michael tells Sonny that he needs to learn to live with Jasper “Jax” Jacks (Ingo Rademacher) being in town, they have a lot of people in common. Valentin Cassidine (James Patrick Stuart) joins Sonny and wants to discuss Jax. Valentin thinks he and Sonny should join forces to get rid of Jax. Sonny asks about the yacht ride this weekend but declines to join him.

General Hospital’s Sasha Gilmore (Sofia Mattsson) arrives for her date with Michael. Sasha tells Michael about Jax buying part of Crimson. Michael says this is not going to end well. Sasha tells Michael that she sees both Jax and Sonny in him. Michael is surprised that Sasha is that perceptive. Michael and Sasha don’t want the evening to end. Sasha invites Michael for an after dinner drink in her room.

Alexis tells Neil that she and Jacks get along because they never consummated their relationship. Alexis tells Neil that she resents Kristina’s secret being about her. She resents Kristina Davis Corinthos (Lexi Ainsworth) and doesn’t know what to do about it. Alexis tells Neil she wants to ask Kristina about the secret, he advises against it. Alexis accuses Neil of not being objective when it comes to Kristina. Alexis searches for information online about Neil and sees something dedicated to his wife and daughter.

General Hospital’s Jordan Ashford (Briana Nicole Henry) and Liz Webber (Rebecca Herbst) talk about the tension between them as Curtis Ashford (Donnell Turner) wants to forge Ryan Chamberlain’s (Jon Lindstrom) signature on papers to donate his kidney. Hamilton Finn (Michael Easton) tells Curtis they would have to make sure Ryan dies on the table if that happened. Valerie Spencer (Paulina Bugembe) stops by to check on Jordan.

Jordan tells Valerie she doesn’t know how to say goodbye to her family. Valerie encourages Jordan to hold on and leaves. Valerie sees Curtis in the hallway and hugs him. Jordan tells Curtis how much she has loved being his wife. Curtis tries to reassure her that she’s going to live.

Finn arrives and tells Jordan they aren’t giving up. Jordan feels her body shutting down. Jordan falls asleep, Curtis tells Jordan she’s not going anywhere on his watch. Liz is outside the room, Finn asks if she’s ok. Liz questions in what universe Ryan gets to live and Jordan has to die.

General Hospital’s Nina Reeves (Michelle Stafford) is telling Sasha how much she is going to enjoy working with Jax. Valentin wants Nina to skip her meeting and go to the ballet. Jax arrives with food and interrupts Nina and Valentin kissing.

Valentin is visibly annoyed with Jax’ presence. Nina and Jax are having dinner; she wants to talk about money, Nina wants a raise in three months. Jax and Nina look forward to working together, and she thanks him for dinner. Valentin comes to escort Nina home, and she informs him she wants to postpone the wedding. Valentin agrees if that is what Nina wants.

General Hospital’s Ava Jerome (Maura West) and Franco Baldwin (Roger Howarth) but show up at Kiki Jerome’s (ex-Haley Erin) grave. Franco tells Ava that Ryan is going to live. Ava is happy to have a chance to try to kill Ryan again. Franco wants Ryan to live long enough to save Jordan. Ava tells Franco she cannot let go of the need for revenge.

General Hospital’s Kevin Collins (Jon Lindstrom) visits Ryan, who is delusional about Ava’s feelings for him. Kevin tells Ryan he realizes that some evil cannot be cured, even by him. Kevin wants Ryan to burn in hell. Ryan says Kevin won’t send him to hell, Kevin tells him not to be so sure. Ryan tells Kevin neither of them wants to kill the other.

Ryan says he and Kevin need each other. Kevin tells Ryan he is a footnote and will be forgotten soon. Finn joins Kevin, and they talk about Ryan. Kevin admits to wanting Ryan gone, Finn tells Kevin the Hippocratic Oath is open to perception. Kevin gets a phone call and replies it’s better this way. Someone injects something into Ryan’s IV.