Bold And The Beautiful Spoilers: Sam Myerson Wants A Leo And Steffy Reunion – Fans Are On Board 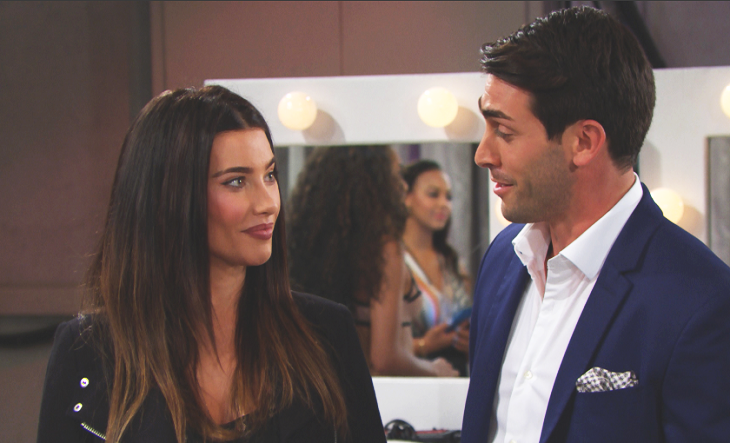 The Bold and the Beautiful spoilers tease that Steffy Forrester (Jacqueline MacInnes Wood) will soon have some decisions to make about her life. Hope Spencer (Annika Noelle) has just decided to end her marriage to Liam Spencer (Scott Clifton), and her hope is that Steffy and Liam will get back together. Hope wants nothing more than for Steffy’s girls to have Liam around as a full-time father, and she knows that this could mean a Steffy/Liam reunion.

But does Steffy really want a reunion with Liam? B&B viewers will remember that Steffy made a conscious choice to “choose herself” and raise her girls on her own.

She nearly married Bill Spencer (Don Diamont), but at the last minute realized that she didn’t need a man to define her. She’s been on her own ever since, and she even turned down a handsome man named “Leo” who asked her out on a date a few months ago.

Do you remember Leo? He was portrayed by Sam Myerson, and he’s become rather famous among many Steffy fans out there. A lot of B&B/Steffy fans would love to see Steffy with someone new, rather than running back to Liam, and they were very excited about the prospect of Steffy being wooed by a hot guy like Leo. The #Steo movement began, and a contingent of fans have been clamoring for Leo to come back and for Steo to get together.

In an interesting turn of events, Sam Myerson recently publicly voiced his opinion about a possible future “Steo” pairing.

On Instagram, Myerson posted a video of Leo and Steffy’s scenes together, along with the following caption: “Do you think Leo will ever get the opportunity to sweep Steffy away on the romantic date she deserves?! I hope so, but I may be a bit biased… #boldandthebeautiful @boldandbeautifulcbs.”

Myerson’s post has garnered a lot of fan response, and most of the responses indicate great enthusiasm for a possible future Leo and Steffy pairing. One fan commented: “Would love to see Steffy & Leo together! Really liked Leo!” And another commented: “We having been wanting #Steo from day one!!! Bell @boldandbeautifulcbs You need to listen!!!”

Bold And The Beautiful Spoilers – Positive Fan Response To Myerson

Myerson’s post also prompted Courtney Hope, who portrays Sally Spectra on B&B, to comment. Courtney wrote: “Well I think it’s a good idea? But I thought so to begin with.” Myerson responded to her comment with: “Haha we were always on the same page!”

It’s interesting to see Mysterson voicing his opinion, as well as the terrific fan response to his post. It’s clearly the case that a LOT of B&B viewers would love to see a hot new guy come in and sweep Steffy off her feet. Would you be on board with a new man for Steffy…someone like the handsome Leo?