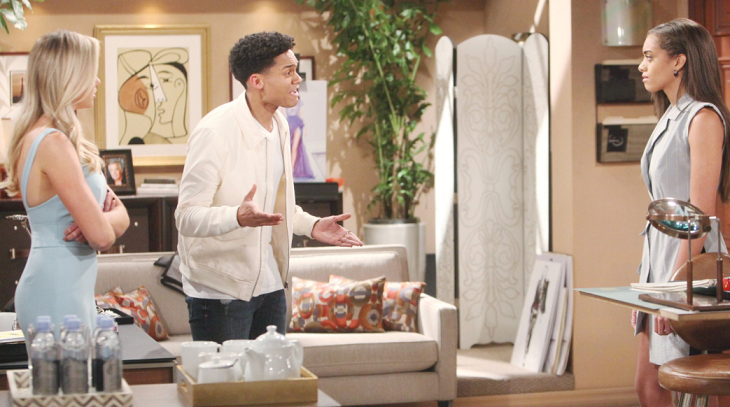 The Bold and the Beautiful spoilers for Wednesday, June 5, tease that Carter Walton (Lawrence Saint-Victor) will be back on the B&B scene, as Hope Spencer (Annika Noelle) summons him for her newfound legal needs. As B&B viewers know, Hope and Liam Spencer (Scott Clifton) are ending their marriage, and Hope will want Carter’s assistance in drawing up annulment papers.

Carter will of course do as Hope wishes, but he’ll offer some counsel and words of friendship first. Carter is very close to both Hope and Liam, and he’ll likely want to be sure that taking this final step is really want Hope wants. Carter knows that she’s been through a terrible ordeal with the loss of her daughter, and he might think that she’d want to wait a bit before making this decision.

Of course, Carter won’t be trying to discourage Hope from doing anything; he’ll just want to offer his friend some encouraging words and make sure that she’s sure about her decision. But according to B&B spoilers, someone else will be hanging around when Carter speaks with Hope, and that’s Thomas Forrester (Matthew Atkinson).

Bold And The Beautiful Spoilers: Who Kills Xander? https://t.co/nJ7vq1qgGj

Bold And The Beautiful Spoilers – Thomas Forrester Has His Own Agenda

In typical Thomas fashion, he’ll get in the middle of the conversation, and apparently he won’t like how Carter’s making Hope second-guess her decision to get an annulment asap. Of course, Thomas has his own agenda here. He wants Hope freed up from Liam right away so that he has a chance to get her for himself.

The Bold and the Beautiful spoilers say that Thomas will balk at Carter’s cautionary words, and he’ll push back against Carter’s advice. It looks like Thomas will opine that Hope is right to be ending her marriage, and he’ll reaffirm for Hope that she’s doing the right thing.

Meanwhile, on Wednesday’s new episode of B&B, Florence “Flo” Fulton (Katrina Bowden) will get a shock. She’ll hear from Zoe Buckingham (Kiara Barnes) that Xander Avant (Adain Bradley) knows all about their secret. Flo will be horrified and scared that the Xander won’t be willing to keep the secret, and she’ll have good reason to be worried.

The Bold and the Beautiful spoilers say that later, Zoe, Flo, and Xander will meet up and argue about the merits of keeping versus spilling the secret about Hope and Liam’s daughter being alive. We’ll see a more intense, angrier side of Xander than we’re used to as he forcefully tells the ladies that the secret is going to come out.

It doesn’t look like Flo or Zoe are going to be able to persuade Xander to keep a lid on the secret, as B&B spoilers say that their argument will end with Xander making a significant threat against them. Xander will likely give them an ultimatum – either they spill the secret, or he will.