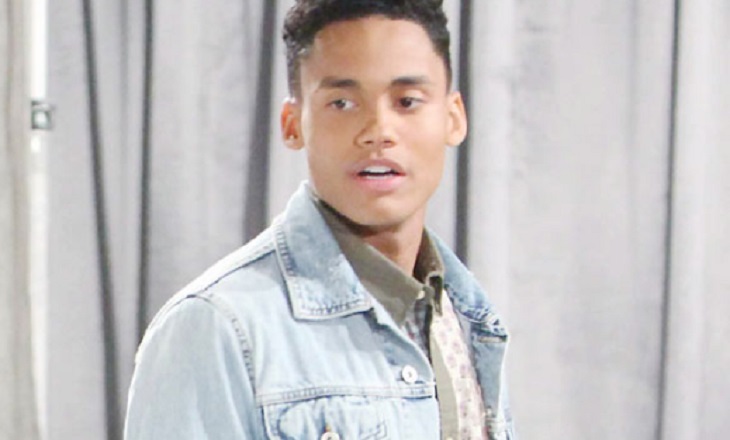 The Bold and the Beautiful spoilers indicate that Xander Avant’s (Adain Bradley) life will be in danger now that he knows the truth about the baby switch.

After overhearing a conversation between Zoe Buckingham (Kiara Barnes) and Flo Fulton (Katrina Bowden), Xander learned that Hope Logan’s (Annika Noelle) baby is alive. Despite Zoe’s pleas to keep it a secret, Xander wants to tell Hope the truth.  However, his honorable intentions could cost him his life.

Bold And The Beautiful Spoilers – Baby Reveal Will Change Everything

There’s a lot at stake if the baby switch is revealed. While it’ll be a happy occasion for Hope and her husband Liam Spencer (Scott Clifton), there will be dire consequences for Zoe and Flo. Not only will Zoe’s father Reese Buckingham (Wayne Brady) go to jail for kidnapping, but she and Flo will also face punishment.

Zoe is desperate to protect herself and her father, that she is willing to do anything.

So does that mean she’ll kill Xander?

Zoe will be the top suspect in Xander’s murder due to her past schemes. Yet, that doesn’t mean that she’ll commit the crime. Zoe loves Xander and if anything were to happen to him it’d break her heart. Even though Zoe has pulled some wild stunts in the past, she doesn’t seem like the murdering kind.

Reese would be the next suspect on the list. He’s the mastermind behind the plot and if he gets wind that his secret is about to be revealed, he’ll eliminate the problem. But is he willing to kill his daughter’s boyfriend to protect himself?

Bold And The Beautiful Spoilers – Who Will Kill Xander?

The next suspect on the list is Thomas Forrester (Matthew Atkinson). As viewers have seen, Thomas is becoming unhinged in his obsession with Hope. This week Xander interrupts a private moment between the couple, and Thomas threatens Xander.

If Thomas discovers the truth about the baby switch, he knows it will bring Hope and Liam together again. With his plan in jeopardy, Thomas will want to keep the truth hidden. The only way to do that is to make sure Xander stays quiet, and Thomas will do anything to make sure that happens.

Do you think Xander’s life is in danger now that he knows the truth? Who do you think will kill him?