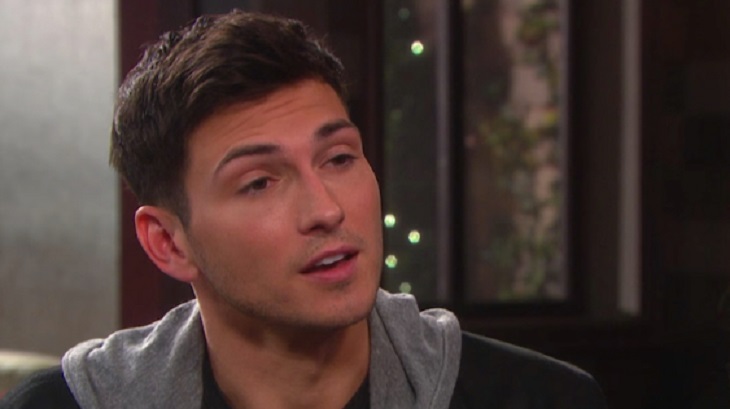 Days of Our Lives spoilers tease that Ben Weston (Robert Scott Wilson) has a shocking realization in Tuesday’s episode of Days of Our Lives! Ben and his girlfriend Ciara Brady (Victoria Konefal) are sitting near the coffee shop where Tripp Dalton (Lucas Adams) and Claire Brady (Olivia Rose Keegan) work, while Claire is on shift, probably at an outside table.

They are discussing Ben’s suspicions that Claire was the one who set the first cabin fire that Ciara was trapped in, the one where Ben and she met and got acquainted when she broke her leg out riding motorcycle and he got her to the cabin for shelter and set her leg. Days of Our Lives viewers will recall that Ben originally had been a person of interest in that fire, but was later ruled out for lack of evidence.

Ben had talked to Ciara about the possibility of Claire being the one who set the fire before, as Days of Our Lives viewers will recall, but Ciara didn’t want to believe it. Now, he is probably talking about his recent hypnosis session with Dr. Marlena Evans (Deidre Hall) and telling her about the “music” he remembered hearing during the session.

Who's the master of disguise on #DAYS? pic.twitter.com/U58hkpatBW

Ciara probably still won’t want to believe that Claire set the fire, although she may acknowledge that Claire may have been in the vicinity; after all, there was talk of Tripp having been nearby with a gas can as well, although that was never proven, and Claire could have followed Tripp there. Tripp had no motive at the time although the fire could have been set accidentally by spilling gas somewhere. He was probably looking for Ciara, who was considered missing at the time.

As Ben and Ciara are talking, and he talks about his suspicions regarding Claire and her having started the fire, poor Claire overhears it and is totally freaked out! She calls Eve Deveraux (Kassie DePaiva) to talk about it but gets her voicemail; then, Eve calls her back but Claire is close enough to Ben and Ciara that Ben hears the ringtone and has the shocking realization that it was the “music” he remembered hearing at the cabin that day!

Even though he has suspected Claire was there, and that she could have started the fire, it sinks in that she must have and he is rocked to the core! Claire has this childlike quality about her, and he realizes the maniacal things she has done are not just little-girl maniacal – like lies and manipulation to break people up – they are murderously maniacal like burning people up alive!

Days Of Our Lives (DOOL) Spoilers: Dr. Laura Horton Checks Back In For Salem

Days Of Our Lives Spoilers: Tony And Chad Team Up, Can They Save Kristen From…

Days Of Our Lives Spoilers: Tripp Pushes Charlie To Make A Confession