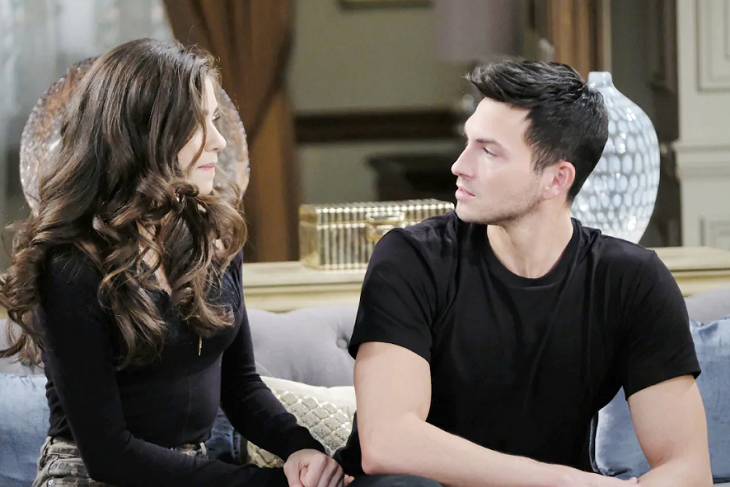 Ciara tries to get Ben to come to bed, but he tells her he had a nightmare about the fire. Ciara tells Ben he probably dreamed about the fire because they talked about it last night. Ben needs to get to the bottom of it because some people still believe he started it. He tells Ciara he wants another session with Marlena because he remembered something new.

Ben tells Ciara about the music he head playing before he got to the cabin. He says the sound is familiar, he’s heard it over and over. Ben hums the song for Ciara, but she doesn’t recognize it. Ciara and Ben go to the square to eat. Ciara wants Ben to stop trying to blame Claire; Claire overhears them. Claire demands that Eve do something now. Claire goes to take Ben and Ciara’s order and her phone rings; Ben recognizes the tone.

Days Of Our Lives Spoilers – JJ Deveraux Is Arrested

Jack tells J.J. he is the only one who can help Jennifer out now. He wants J.J. to come back with Haley, and he will drop the charges against Jennifer. J.J. curses Jack who tells him to get back soon, or Jennifer will suffer the consequences. J.J. tells Haley about Jack’s call, and Haley insists they return to Salem. J.J. refuses to let Haley be deported, J.J. wants to turn himself in and leave Haley with Tripp. J.J. wants Tripp to take Haley to Canada and come back. J.J. promises to join Haley is Canada later. Tripp messages Rory (Kevin Riggin) for help.

Days of Our Lives Eve Deveraux (Kassie DePaiva) puts Rory in a room with Jennifer Horton (Melissa Reeves) to see which will break and give the police evidence first. Jennifer tries to get Rory to give her information by offering to compensate him for information. Eve threatens to add bribery to Jennifer’s charges. Jack tells Jennifer that he used her to get J.J. to come back to Salem. J.J. arrives at the police station and demands Jack gets Jennifer out of the middle of it or he’s not talking. Rory is released from custody. Jack drops the charges against Jennifer. Jack demands to know where Haley is. J.J. tells Jack to go to hell. Jack has J.J. arrested because he refuses to turn his back on Haley.

Days Of Our Lives Spoilers – Marlena Evans Is Concerned

Days of Our Lives Marlena Evans (Deidre Hall) shows up at the loft to visit Claire who assumes Ciara sent her. Claire tells Marlena that Tripp broke up with her, but it was her fault because she did something stupid.

Who's the master of disguise on #DAYS? pic.twitter.com/U58hkpatBW

Claire tells Marlena how upset she was by Tripp’s marriage. Claire tells Marlena that she made the recording that exposed Tripp and Haley’s marriage as a fraud. Marlena tells Claire that it was about keeping Haley from being deported and nothing more. She tells Claire she is trying to justify what she did. Claire claims to hate herself for what she did.

Marlena says Claire was put in an uncomfortable position. Marlena says she and Claire should have talked before this. Claire tells Marlena that last night Tripp acted as he might forgive her but left and hasn’t been back. Claire accuses Marlena of thinking she is crazy. Marlena sees Maggie Kiriakis (Suzanne Rogers) figurine that Ciara glued back together.

Days Of Our Lives Spoilers – Will Horton Says He’s Dying

Claire says she doesn’t deserve anything Ciara does for her. Marlena brings up Ciara’s motorcycle accident. Claire tells Marlena she needs to tell her something. She starts to confess to Marlena, but Tripp interrupts them by calling. Tripp tells Claire he’s going to visit his dad for a few days. Claire has to cover Tripp’s shift at work; Claire lies about what she wanted to tell Marlena. Marlena recognizes the ring tone on Claire’s phone.

Days of Our Lives Will is writing a story for the paper and wants Sonny Kiriakis (Freddie Smith) to get his computer for him. Will says this could be his last story. Sonny doesn’t want to talk about Will’s impending death, but Will needs to discuss it. Sonny takes the pad of paper from Will and helps him write the story. Sonny thinks Will should write something with less to remember. Will asks if he should be writing his will. Will yells at Sonny that they are doing things his way. Marlena comes by the hospital to see Will. Marlena asks why Kayla Johnson (Mary Beth Evans) didn’t call her. Will tells Marlena that he is dying.