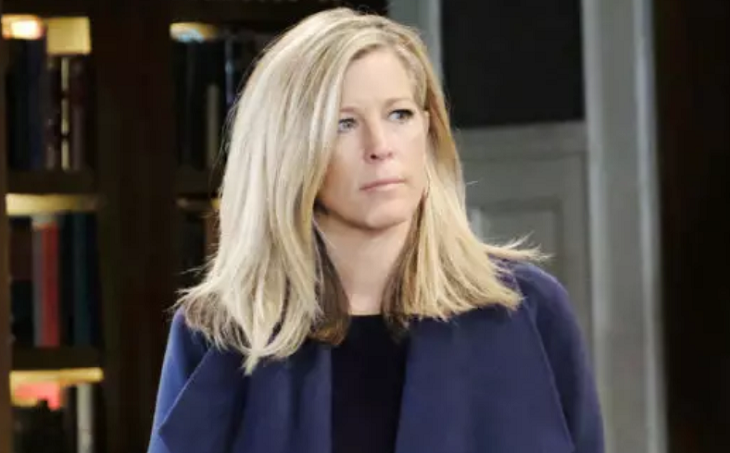 Sonny and Carly discuss Morgan Corinthos (ex-Bryan Craig) when Jocelyn Jacks (Eden McCoy) joins them and shows them new cords she has learned. Sonny offers to get Jocelyn guitar lessons after school is out. Sonny and Carly tell Jocelyn to come to them anytime she needs him. Carly feels the baby move and lets Jocelyn feel it too. Jocelyn is amazed that there is a life in there.

General Hospital’s Cameron Webber (William Lipton) arrives and asks Jocelyn how the guitar is coming along. Cameron tells Jocelyn how he got into playing guitar. Cameron tells Jocelyn that music lets you say the things you don’t have the words to say. Cameron asks what is wrong with Jocelyn; she tells him about the baby moving. Jocelyn feels like she’s on the outside looking in and not in her body. Jocelyn doesn’t want to be ok or stop thinking about Oscar. Jocelyn tells Cameron about seeing Oscar in the crowd at the nurse’s ball.

General Hospital’s Drew Cain (Billy Miller) goes to Kim Nero’s (Tamara Braun) room and asks if she wants to keep the urn with her tonight. Kim doesn’t want to sleep and is filling up on coffee to stay awake. Kim is panicking, and Drew wants to know why. Kim tells Drew that when she sleeps, she dreams Oscar is still alive. Kim says staying awake is better than losing him over and over again.

Kim didn’t know how to prepare herself for losing Oscar. Kim says this isn’t about Kim, the doctor; it’s about the mother who lost her son. Kim doesn’t know how she is going to make this trip to scatter Oscar’s ashes. Kim doesn’t know how to say goodbye to her only child. Drew doesn’t want to say goodbye either. Drew promises that she will never be alone as long as he is alive. Kim wants to see Oscar one more time and know he is OK.

General Hospital’s T.J. Ashford (Tajh Bellow) is furious that Ryan Chamberlain (Jon Lindstrom) refuses to give Jordan Ashford (Briana Nicole Henry) a kidney. Jordan wants T.J. to forgive Ryan if she dies and to forgive her. Jordan is sorry for cal the secrets she kept from T.J. T.J. tells Jordan he cannot lose her; she has to be there to see her grandbabies.

Stella Henry (Vernee Watson), Curtis Ashford (Donnell Turner), and Hamilton Finn (Michael Easton) come to Jordan’s room. Finn tells them about Ryan’s setback. T.J. asks if Ryan is awake. Both T.J. and Stella leave the room, Stella says she is going to get Jordan that kidney. Jordan is telling Curtis goodbye when T.J. arrives and tells them Ryan has consented to give up his kidney. Curtis wants to make sure this is real.

General Hospital’s Ryan is lying in bed when a gloved hand injects something into his IV that causes a seizure. Finn and Liz help Ryan, who begs Finn not to let him die. Finn sends Ryan for tests and figures out it was an allergic reaction. T.J. goes to Ryan’s room, and Valerie Spencer (Pauline Begembe) doesn’t want to let him in, but she does. Ryan refuses to give in to T.J.’s request.

Stella comes in and informs Ryan that she’s not leaving until Jordan gets that kidney one way or another. Stella tells Ryan she believes in a higher power. Stella says every move Ryan has made brought him to this moment. Stella tells Ryan he can’t bear the thought of ceasing to exit. Stella tells Ryan if he doesn’t help Jordan, the forces can come together and finally kill him. Ryan will go straight to hell; he can give up his kidney and live or without it and die.

TODAY ON #GH… Ryan's life flashes before his eyes. Plus, Cameron helps Josslyn cope and Jordan prepares for the end. Don't miss it! #GeneralHospital

General Hospital’s Curtis Ashford (Donnell Turner) arrives outside Jordan’s room and sits on the sofa. Stella Henry (Vernee Watson) joins Curtis and asks if Ryan refused to help Jordan. Stella informs Curtis it is her turn to talk to Ryan; he doesn’t want her alone with him.

Stella isn’t afraid of Ryan and says she’s Curtis’ secret weapon. Curtis doesn’t think it will do any good for Stella to talk to Ryan, she insists. Ryan tells Finn he will donate the kidney. Stella brings the papers for Ryan to sign, and he hesitates. Ryan is afraid someone will try to kill him while he’s in the operating room. Finn promises to protect him and Stella promises to testify for Ryan at his trial.

General Hospital’s Franco Baldwin (Roger Howarth) walks into the hallway and disregards a pair of gloves in the garbage can. Cameron Webber (William Lipton) sees Franco and asks when he became a doctor. Franco asks what Cameron is talking about; he questions why Franco had the gloves on anyway. Franco says he was cleaning up paint.

Franco tries to ask how Cameron is doing; he assures Franco he will let him know if he needs to talk to him about anything. Liz tells Franco about Ryan’s seizure; he hopes this is the end of Ryan. Liz says he couldn’t help but think this is what Ryan deserves. Jordan tells Franco about her conversation with Jordan earlier. Franco is glad too because the ends justified the means.