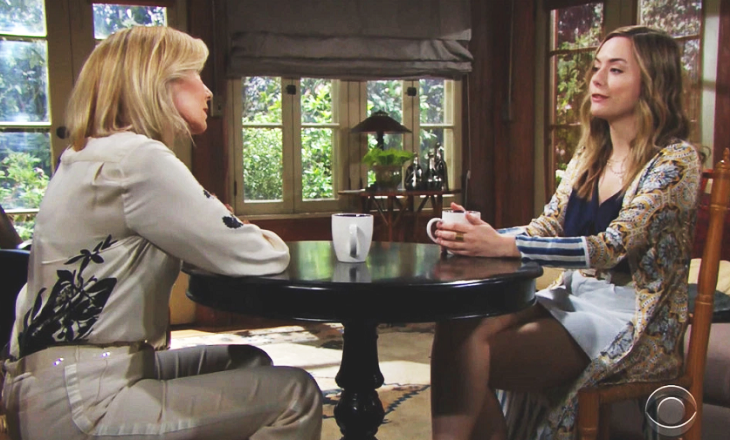 The Bold and the Beautiful spoilers for Thursday, June 6, tease that Brooke Forrester (Katherine Kelly Lang) will get some shocking news. She has been distraught lately about her daughter Hope Spencer’s (Annika Noelle) decision to end her marriage to Liam Spencer (Scott Clifton).

She’s lamented to Ridge Forrester (Thorsten Kaye) about the situation, but he’s of the belief that what Hope’s doing is sad, but still the right thing given the situation.

But Brooke simply won’t relent that Hope ending her marriage is for the best. Brooke truly believes that Hope and Liam belong together, and that the best way for Hope to heal from losing her daughter is to share her feelings and grieve with Liam. On Thursday’s episode of B&B, Brooke will once again talk with her daughter and urge her to reconsider her decision to end things with Liam.

Bold And The Beautiful Spoilers – Brooke Forrester Is Stunned

However, what Brooke hears from Hope will stun her. She’ll learn that Hope already had Carter Walton (Lawrence Saint-Victor) draw up annulment papers and sent them to Liam. That will absolutely break Brooke’s heart.

Hope is under the unwavering impression that Kelly Spencer (Chloe Teperman and Zoe Pennington) and Phoebe Forrester (River Davidson and Madeline Valdez) can only have a solid future if she ends her marriage to Liam.

The Bold and the Beautiful spoilers say that Brooke will hate the fact that Hope’s moving forward with the annulment so quickly, and she’ll get the feeling that something’s just not right with the situation. As B&B viewers know, she’s right, because Thomas Forrester (Matthew Atkinson) has been working to manipulate the situation and convince Hope to end things asap.

Brooke will plead with her daughter to slow things down and think about what she’s doing before making rash decisions that can’t be undone. But Hope’s not going to relent, and her plans for the annulment will continue to go forward.

Meanwhile, on Thursday’s new episode of B&B, Thomas will get an earful from Liam. It looks like the two will end up in the same place at the same time, and an argument will ensue. Liam will probably be raw from having just received the annulment papers from Hope, and he’ll have some choice words for Thomas.

According to B&B spoilers, Liam will call out Thomas’ underlying reasons for his manipulations. Liam knows Thomas’ game – specifically, that he’s used Hope’s grief and her devotion to Douglas Forrester (Henry Joseph Samiri) to get her to end their marriage. Thomas is a master manipulator, and he’s played on Hope’s fears and feelings about the children big time.

Of course, Liam’s words probably won’t mean much to Thomas. Thomas will be happy because he’s getting exactly what he wanted…to break up Liam and Hope. He’ll probably only feed off of Liam’s anger and grief over losing his marriage, as nothing will stop his plan to get Hope for himself and as a mother for Douglas.