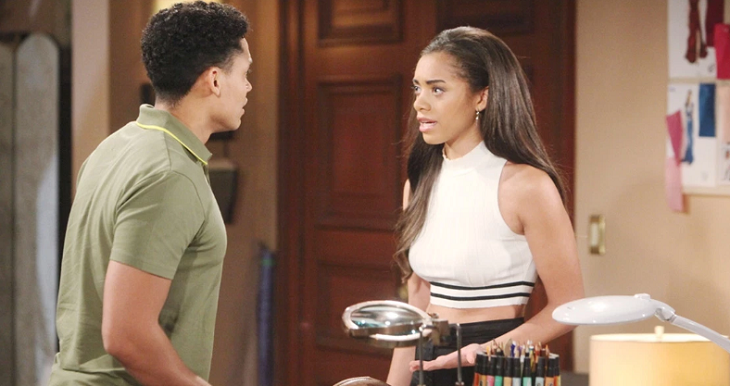 The Bold and the Beautiful spoilers tease that Xander Avant (Adain Bradley) will be feeling on edge. He absolutely can’t believe the tale he heard from his girlfriend Zoe Buckingham (Kiara Barnes).

That led to a huge blowup between Xander and Zoe, during which Zoe spilled all the details about what her father Reese Buckingham (Wayne Brady) did. As B&B viewers know, Reese led Hope and Liam Spencer (Scott Clifton) to believe that Beth died during childbirth, when in fact she’s alive and well. Then, Reese arranged for Beth to be adopted to Steffy Forrester (Jacqueline MacInnes Wood).

Bold And The Beautiful Spoilers – Xander Avant Is Outraged

Of course, Xander was outraged by the whole story, and all he wants is for Zoe to come clean and tell Hope that her daughter is alive. But of course, nothing can be that simple.

Do you think Flo will listen to Xander? #BoldandBeautiful pic.twitter.com/EYLzMyyatv

As Zoe has pointed out many times, if the truth ever comes out, then she, Reese, and Flo would certainly face criminal charges and could spend serious time in jail. It looks like Xander will understand and appreciate that, but he’ll still push for Hope to be told the truth about her baby.

In fact, B&B viewers can look for a huge argument to transpire between Zoe, Flo, and Xander. Xander will rage at the ladies for what they’ve participated in and conspired to conceal, and according to B&B spoilers, viewers will see a new, more forceful side of Xander.

Bold And The Beautiful Spoilers – Argument Will Be Heated

Of course, we can’t forget that the Avant family is close with the Forresters, Logans, and Spencers, and Xander will feel like if he keeps this terrible secret, it will be betraying family.

The Bold and the Beautiful spoilers say that Flo, Zoe, and Xander’s argument will be heated. It appears that Zoe won’t be able to exert the control she’s used to having over Flo with Xander. Ultimately, the argument will end with Xander making a significant threat, but what will the threat be?

Xander may give Flo and Zoe an ultimatum, threatening to tell Hope and Liam about Beth himself if they don’t do it first. Or he could take a more direct approach and threaten to turn them in to the authorities. Whatever the threat is, it looks like we’ll be seeing a more assertive, dark side of Xander than we’re used to. What do you think Xander’s threat will be?