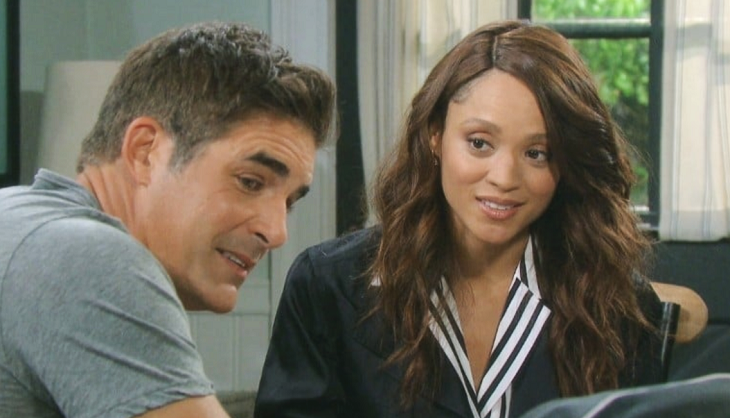 “Days of Our Lives” spoilers for Monday, June 10, tease that the action is about to heat up. Before we get to the drama, we should point out that DOOL will be preempted on Thursday, June 6, and Friday, June 7. Luckily, a brand-new episode will air on Monday and give us some resolution to all the cabin chaos.

Claire Brady (Olivia Rose Keegan) just attempted two more murders by setting the Horton cabin on fire with Tripp Dalton (Lucas Adams) and Haley Chen (Thia Megia) inside. Will Claire regret that decision on Monday or feel satisfied knowing she got some vengeance? Either way, Claire will need to get out of there before she gets caught!

Once Claire’s out of sight, Ben Weston (Robert Scott Wilson) will make it to the Horton cabin. He’ll be taken aback when he sees the growing flames, but he won’t run from danger. There’s a good chance Ben will play the hero and get the victims out just in time.

“Days of Our Lives” spoilers say Haley and Tripp will be unconscious inside, but that’s a small obstacle for a strong guy like Ben. He could easily pull them to safety.

Unfortunately, Claire used the same lighter for this new blaze, which will make it even easier for Eve Deveraux (Kassie DePaiva) to frame Ben. It won’t help that Ben just so happens to be at the scene of the crime!

However, Eve will have another issue to deal with first. “Days” spoilers state that Eve will face intense pressure from Sonny Kiriakis (Freddie Smith). He just threatened to kill Eve if she didn’t hand over the diary, so it’s clear that Sonny means business. Alas, Eve doesn’t have the diary anymore. Xander Cook (Paul Telfer) stole it, so it’ll be a little longer before Will Horton (Chandler Massey) gets a shot at a cure.

Days Of Our Lives Spoilers – Not In Right Frame Of Mind

Other “Days of Our Lives” spoilers say Rafe Hernandez (Galen Gering) will want to clear things up with Lani Price (Sal Stowers). She kissed him, but Rafe won’t think that’s such a good idea. Rafe’s marriage just ended and Eli Grant (Lamon Archey) just broke up with Lani. Neither one of them’s in the right frame of mind for a new relationship.

Besides, Lani’s attachment to David Ridgeway is probably the main factor here. Rafe will insist this can’t happen, but will he change his mind down the road?

Days Of Our Lives Spoilers: The Walls Close In On Claire Brady– Ben Searches For Her For Answers On Cabin Fire! https://t.co/90494Vyolm pic.twitter.com/zc1bpX7QTY