Days Of Our Lives Spoilers And Recap Wednesday, June 5: Claire Tries To Kill Tripp and Haley – Will Asks Marlena To Call Sami 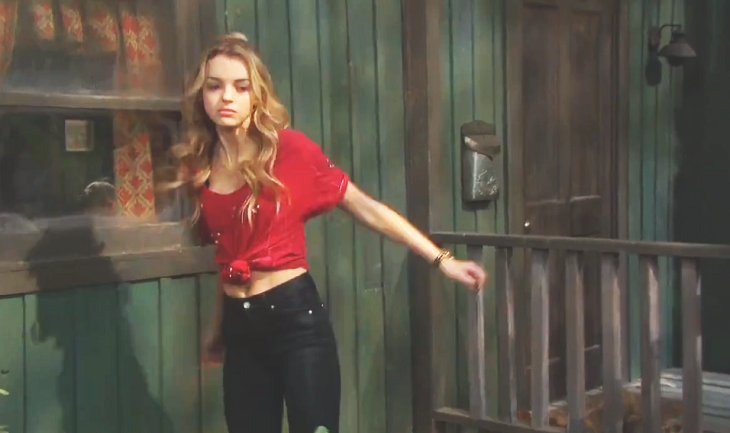 Days of Our Lives (DOOL) recap for Wednesday, Jun 5, 2019, reveals John Black (Drake Hogestyn) arrives at the hospital to find Sonny Kiriakis (Freddie Smith) on the phone with his mom.

John tells Sonny that Marlena Evans (Deidre Hall) asked him to come to the hospital immediately and asks if Will Horton (Chandler Massey) had a setback. Sonny tells John that the radiation isn’t helping. Sonny says it all goes back to Dr. Rolf’s (William Utay) formula, if they could get the diary, they might be able to save Will’s life.

John tells Sonny that he came across a lead. John tells Sonny that he believes Eve Deveraux (Kassie DePaiva) has the diary. Sonny sits with Will and talks to him, encouraging Will to keep fighting. Sonny threatens to go after Eve if she doesn’t produce the journal. Sonny goes to Eve’s office and threatens to kill her if she doesn’t give him the diary.

Days of Our Lives Rafe Hernandez (Galen Gering) arrives home and tells Lani Price (Sal Stowers) that his arm is fine now. Rafe tells Lani it’s unfair to ask her to stay and take care of the baby when she has her life to get back to instead of dwelling on taking care of David. Eli Grant (Lamon Archey) arrives at Rafe’s to visit Lani. Lani tells Eli she’s staying a few more days to help with the transition.

Eli breaks up with Lani and leaves. Lani can’t believe that Eli is breaking up with her. Eli tells Lani that this baby is not their son. Lani says she cares about this baby because he needs her. Eli wants to help her; Lani doesn’t need her help. Lani agrees the relationship is done and tells Eli to leave. Rafe gets David down for his name and tells Lani he needs to learn some of her tricks. Lani tells Rafe that Eli was there and broke up with her. Rafe hugs Lani and apologizes, Lani kisses Rafe.

Days of Our Lives Will tells Marlena that Kayla Johnson (Mary Beth Evans) says his tumor is killing him and it could be a matter of days until he dies. Marlena asks Will about contacting his parents. Will gets a terrible headache and asks Marlena to call his mom. Marlena joins Sonny and John and tells them she had the nurse give Will pain medication. Sonny hugs Marlena and apologizes. John asks if Sami knows yet, she says no. John tells Marlena it’s time to call Will’s parents. Marlena calls Sami Brady (Alison Sweeney) and asks her to call her immediately.

Days of Our Lives Claire Brady (Olivia Rose Keegan) is working at the café when Ben Weston (Robert Scott Wilson) and Ciara Brady (Victoria Konefal) arrive to order breakfast. Claire’s phone rings and Ben recognizes the ringtone. Ciara asks Ben if something is wrong, he says yes. Ben replays his conversation with Marlena in his head, Ciara wants to help him and begs him to tell her what is on his mind.

Eve shows up and threatens to lock Ben up for good. Ciara wants to claim harassment; Ben begs her to drop it. Eve searches for Claire as well when Ciara confronts her. Eve warns Ciara that she is gunning for Ben. Ciara tells Eve she won’t let her railroad, Ben. Ciara comes back to find Ben gone.

Days of Our Lives Claire calls Eve who tells Claire to bring the lighter to her so she can plant it on Ben. Eve tells Claire she will come to meet her at the café. Claire bumps into Rory (Kevin Riggin) and sees the passports he’s obtained for Haley Chen (Thia Megia) and Tripp Dalton (Lucas Adams). Claire demands to know if Tripp is running away with Haley. Rory tries to get the passports back from Claire. Claire says she knows all about this; she can’t help if not kept in the loop.

Days Of Our Lives Spoilers – Claire Brady Over The Edge

Rory agrees that they have a change of plans. Rory tells Claire he has to catch the ferry to Smith Island. Claire offers to take the passports to the island for him. Rory gives Claire the passports so she can deliver them. Ben just misses Claire but runs into Rory. Ben asks where Claire went, Rory refuses. Ben tells Rory he is going to want to be honest. Ben introduces himself to Rory and demands answers. Ben threatens to strangle Rory if he doesn’t tell him where Claire went. Ciara comes upon Rory in the park, and he tells her about his run-in with Ben.

Days of Our Lives Tripp insists on getting Haley out of the country. Tripp tells Haley she’s afraid Claire has been pushed over the edge now. Haley tells Tripp he is such a good person. Tripp says he let Claire down she gets paranoid and jealous. Tripp almost understands why Claire turned them into the cops. Haley tells Tripp that Claire has problems; he hopes she gets help.

Days Of Our Lives Spoilers: The Walls Close In On Claire Brady– Ben Searches For Her For Answers On Cabin Fire! https://t.co/90494Vyolm pic.twitter.com/zc1bpX7QTY

Tripp says Claire isn’t a bad person and he wants Claire to get better. Claire arrives on the island and sees Tripp and Haley comforting each other. Claire keeps hearing voices in her head telling her what she can do to Tripp and Haley, then she sees a gas can and pours gas around the cabin. Tripp wonders what is taking Rory so long as Claire lights the cabin on fire.