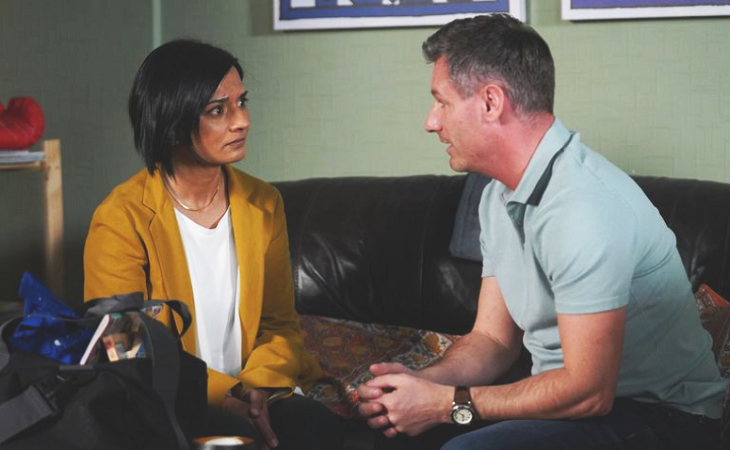 “EastEnders” is getting a blast from the past as the show brings back Nita Mistry (Bindya Solanki), a character who was last seen on screen 16 years ago. The soap confirmed her return last week, but the official pictures that preview the storyline were released only today.

Solanki briefly returns to the soap as part of Robbie Jackson’s (Dean Gaffney) storyline. Viewers will see Robbie back on Albert Square along with his son, Sami, in tonight’s episode.

The father and the son reunion isn’t going to last for long as the youngster is set to return to his mom after a few days.

However, Robbie ignores his ex-wife’s calls when the time comes for Sami to go home. He doesn’t let anyone know that Nita wants her son back. However, he won’t be able to keep this secret for long as she will be back in town after more than a decade.

She’s not going back for a vacation but to confront Robbie. Her arrival will stir things up, but will she manage to fix the budding conflict with his ex-husband?

Monday’s episode showed the return of Dean Gaffney as Robbie Jackson. In an interview last March, Gaffney said, “Robbie has been off in India soul-searching. He’s gone to right some wrongs, cross some ‘T’s and dot some ‘I’s. When he comes back, which is not too long now, is he alone? Has he found love?”

Viewers have yet to find out if Robbie will reunite with his ex-wife Nita or perhaps find new love on his return to Albert Square.

Meanwhile, Nita first arrived in Walford back in November 2001. She was raising her son Anish alone after her husband passed away. She worked at the Minute Mart and met Robbie in the community theater.

She married Robbie, and they both left in 2003 when Nita’s family asked her to return to India. That was the last time Nita was seen on screen, but Robbie returned to Walford in 2010 for a wedding. That time, Robbie said Nita was unable to join because she was six months pregnant. Later, she gave birth to a boy off-screen.