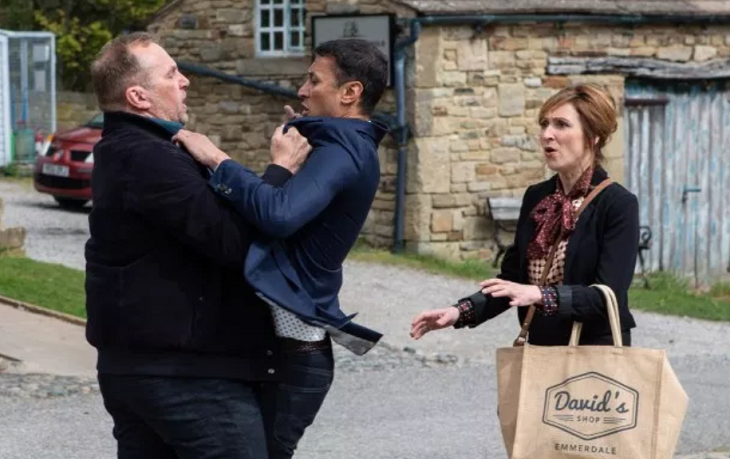 On “Emmerdale,” Jai Sharma (Chris Bisson) will get into trouble next week as an angry Will Taylor (Dean Andrews) confronts him about the rumors that he is Harriet Finch’s (Katherine Dow Blyton) new love interest.

Viewers know that Harriet started it all when she lied to everyone that she is interested in Jai just so she could cover her real feelings for Will. When word reaches Will that Harriet and Jai are starting to become romantically involved, he storms off to find Jai and confront him.

How will the businessman convince Will that there is nothing going on between him and Harriet? Will Harriet finally be turned off by Will’s latest outburst?

"Help me fix her. Tell her the truth…and then we can start again." #Emmerdale pic.twitter.com/RpZKiCVykS

Before that incident, Dawn Taylor (Olivia Bromley) and Will had a fight at Woodbine cottage over the latter’s actions, which she believes have gone too far. Their conversation ended up in a scuffle, causing Dawn to hit her head on a table. Instead of helping his daughter, Will does nothing and flees the cottage.

Harriet feels confused after Will’s last message to her. She managed to resist Will’s invitation for a reunion but forgetting about her old flame is easier said than done. She tries to make everyone believes that she’s over Will and comes up with a cover romance with the sweet factory boss.

However, Laurel Thomas (Charlotte Bellamy) is worried about her friend and is concerned about Jai getting mixed up in all the drama. With Will about to commit a violent act upon Jai, will Harriet admit that it was all a ploy and that she still has feelings for him?

A lot of “Emmerdale” fans were left feeling furious after Harriet shared an intimate kiss with Will. In an interview with The Sun, Andrews teased that there could be a budding romance between his alter ego and the vicar even though his character tried to kill Harriet.

“It’s that point where you never quite know until that person’s right in front of you. I suppose we’ve all had a relationship where one moment you’re like, ‘I can’t stand you’, and next moment you’re back in love,” Andrews said. “I guess that [example] is quite a jump from jail. But it is Emmerdale! I don’t know. I don’t know until that moment arrives. I don’t want him to be awful all the time.”