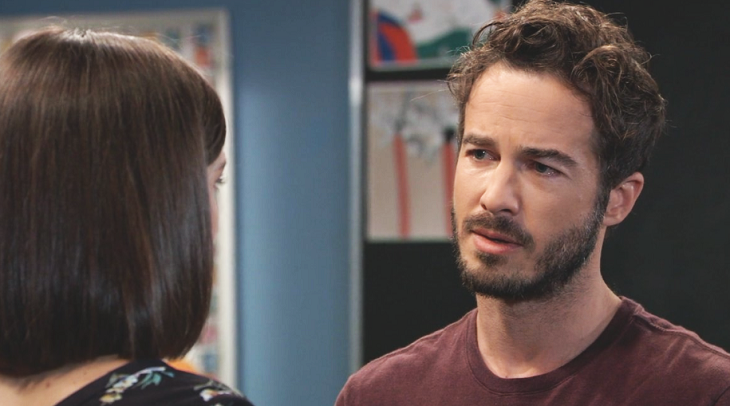 Margaux accuses Sonny of being jealous of Shiloh because Kristian Corinthos-Davis (Lexi Ainsworth) looked up to him. Jason tells Margaux that Shiloh kidnapped and sexually assaulted Sam. Jason and Sonny inform her that Shiloh’s words are on the flash drive. Margaux listens to part of the audio. Sonny demands to know if Margaux is going to do her part in bringing Shiloh to justice.

Sonny shows Margaux her pledge. Jason leaves Sonny to deal with Margaux. She calls and has a warrant issued for Shiloh’s arrest. Sonny tells Margaux he’s not blackmailing her like Shiloh was, Margaux, disagrees. Margaux tells Sonny if that pledge goes public her career is over.

Margaux tells Sonny it’s over, he won. She starts to leave; Sonny gives her the pledge back. Sonny doesn’t want to have leverage over her. Sonny tells Margaux she did the right thing and wants her to take care of herself.

Maxie encourages Lulu to keep working on it. Peter believes there is another way for Lulu to prove herself. Maxie assures Lulu there is nothing wrong with going out to have a night out and a free meal. Lulu heads off to get started on her investigation. Peter tried to get Maxie to back off on the search for Dante.

General Hospital’s Brad Cooper (Parry Shen) and Michael Corinthos (Chad Duell) are telling Wiley Cooper Jones (Theo and Erik Olson) how they plan to protect him. Michael tells Wiley that he has no idea how many people love him. Michael tells Brad that Willow Tait (Katelyn MacMullen) had no idea who Wiley was until recently.

General Hospital’s Harmony Miller (Inga Cadranel) shows up in Shiloh’s room and asks what she can do for him. Shiloh wants to make sure Harmony didn’t help keep his child from him. He tells Harmony her mission is to find out where his child is. Shiloh accuses Harmony of being jealous of Willow and should be grateful that he gave her another opportunity for redemption.

General Hospital’s Lucas Jones (Ryan Carnes) shows up at the school to speak to Willow. She tells Lucas she did everything she could to protect her son. Lucas has no intention of letting Shiloh get his hands on Wiley. Lucas apologizes to Willow, but Michael convinced him otherwise. He realizes they all want to protect Wiley. Lucas asks why Willow let them keep Wiley. Willow says she knows Wiley is where he belongs.

Lucas tells Willow it would be an honor for her to be a part of Wiley’s life, she declines. Willow tells Lucas that Shiloh will have her watched constantly. Willow says they cannot give Shiloh any reason to come after Wiley. Lucas wishes Wiley could know her. Willow tells Lucas to make sure to protect Wiley.

Lucas promises to tells Wiley about her when he’s older. Chase shows up, and Willow tells him about her visit with Lucas. Chase gets a call to arrest Shiloh for sexual assault. Chase kisses Willow and heads to the hospital. Harmony shows up and tells her Shiloh knows the baby is alive. Harmony tells Willow she needs her help again and demands to know where the baby is.

General Hospital’s Sam and Julian Jerome go to the courthouse. Sam poses as Willow to amend Willow’s adoption agreement. A fire alarm goes off as they are trying to take care of the paperwork. Sam and Julian switch papers around while the clerk is distracted to get the document she needs to be filed taken care of to protect Wiley. Jason meets Michael at Charlie’s, Sam McCall (Kelly Monaco) and Julian Jerome (William DeVry) arrive as well.

Sam tells Michael that Jason is moving back home. Sam tells Julian that he did well today. Brad arrives to meet Lucas at Charlie’s. Lucas gets to Charlie’s, and Sam tells him Julian has news for him. Sam says Wiley is in a better place today than he was yesterday. Julian tells Lucas and Brad that the paper trail to Wiley has been eliminated.