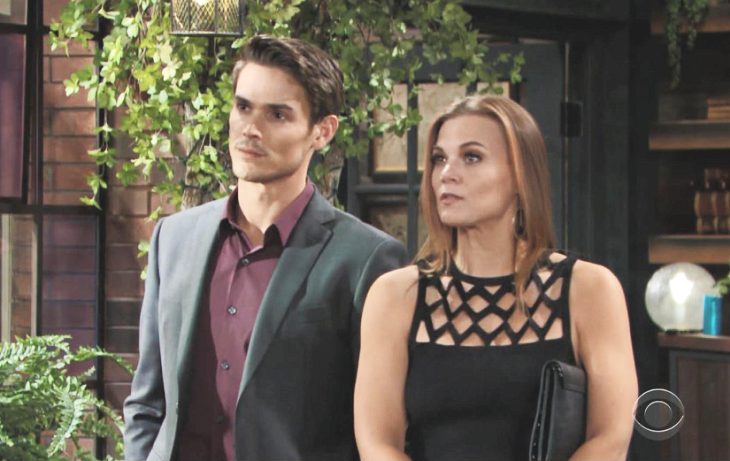 “The Young and the Restless” (YR) recap for Wednesday, June 5, 2019 reveals that over at Society, Billy Abbott (Jason Thompson) informs Adam Newman (Mark Grossman) he’s not invited to the recommitment ceremony. Adam says it’s Nick Newman (Joshua Morrow) and Victor Newman (Eric Braeden) who have let him down, not Victoria Newman (Amelia Heinle). Billy tells him to start walking. Adam congratulates him and leaves.

At the Athletic Club, Summer Newman (Hunter King) awakens next to Theo (Tyler Johnson). He thought last night was incredible. She agrees. Theo invites her out and Summer accepts – she has the perfect thing for them to do today.

At Nick’s place, he, Victoria Newman, Nikki Newman (Melody Thomas Scott), and Abby Newman (Melissa Ordway) gather. Abby exits with Nikki and confides she’s worried about Victor’s health. Nikki learns about the text and promises to find out what’s going on. Abby rejoins her siblings and says they’re lucky to have each other.

At Newman Enterprises, Nate Hastings (Sean Dominic) grumbles about not doing Victor Newman’s first treatment at the hospital. Victor doesn’t want to be seen there. They discuss Abby Newman’s concern. Nate feels Victor should come clean. The Mustache will keep it private for now and if the treatment works no one will have to know.

Later, Nikki  arrives and confronts Victor about his health. She won’t accept vague, evasive answers. Victor explains he has a rare blood disease where something destroys the red blood cells in his own body – it’s life-threatening but Victor’s optimistic. Nikki, stunned, states they’ll do this together. Victor wants to right the wrongs with Adam. Nikki suggests telling the children, but he refuses.

Y&R’s Phyllis Summers (Gina Tognoni) arrives at the tackhouse and tells Adam she’s turning him down. Adam insists he’s not out to hurt Nick – Dark Horse is just a means to a much greater end. She realizes he wants to use it as leverage to get Christian and thinks it’s low.

Young And The Restless Spoilers – Serve As A Wake-Up Call

Adam feels it will serve as a wake-up call, and reminds Phyllis what it’s like to be on the outside looking in; being treated like a villain. The Abbotts and Newmans will always treat them like pariahs until they teach them a lesson. Phyllis knows he’s manipulating her emotions – the evil genius schtick is getting on her nerves. She asks what he has in mind.

Traci Abbott (Beth Maitland), Jack Abbott (Peter Bergman) and Kyle Abbott (Michael Mealor) join Billy  at Society – they’re happy for him. Summer enters on Theo’s arm. Victoria enters and walks up to Billy. The kids enthuse about the party. Abby steps out to take a call from Nikki, and Kyle checks in with Summer. Nick is holding Christian and teases the boy will be his best man if he ever remarries.

Billy mentions Adam Newman going after Christian, but Nick doesn’t want to discuss it. Next, Nick upbraids Summer for bringing Theo to a small family event. She’s just having fun. Victor Newman and Nikki arrive. Victoria’s surprised her father made it. Victor wants her to be happy. Billy and Victoria bring the kids up on stage and speak about their re-commitment.

Johnny’s made a necklace for Victoria, and Katie’s made a hanky for Billy’s pocket. As they kiss and everyone applauds, Adam and Phyllis Summers enter. She hollers, “Looks like we made it for the big finish.” Abby takes the kids out.

Billy takes Phyllis aside and Victoria warns Adam his stunt won’t ruin their day. Kyle whispers with Theo and Summer, who wonders why Adam’s with her mom. In the entrance way, Billy confronts Phyllis – what happened to the woman he knew? Phyllis hisses about betrayal – she’s the Phoenix rising from the ashes. He says, “Get out.” Victor, meanwhile, tells Adam he’s spitting in his face after all he’s done. Adam counters he hasn’t done nearly enough.

He greets Christian, and Nick sends the boy off before warning Adam. His brother says Christian will end up with him. Nick orders him out and Adam calls him a caveman. Jack intervenes, so Adam goes. Victoria reassures Billy; Adam and Phyllis are irrelevant. Summer stops Phyllis – she’s making a fool of herself and burning bridges.

Phyllis snarls about her siding with the Abbotts after what Kyle did to her. Who will Summer have left after Jack and Billy leave her like roadkill? Nick says, “She’ll have me.” He takes over with the redhead, and tells her she and Adam are pretty much the same person. Phyllis walks out. After, a celebratory toast is held and the guests start heading out.

Y&R’s Abby learns Nikki spoke with Victor. She assures her everything will be fine. Nearby, Summer  advises Theo her dad’s not the one he has to impress – that would be her. He replies, “Yes, Ma’am.” As Billy  tells Victoria Newman he booked them a getaway, Kyle sneaks into the kitchen and kisses Lola Rosales (Sasha Calle) .

She remarks on Victoria and Billy’s love. Kyle ties a paper around her finger and promises not to let anyone come between them again. They express their love and Kyle decides they should do this for real and proposes. At the tack-house, Phyllis tells Adam he was right then says she’s all in.