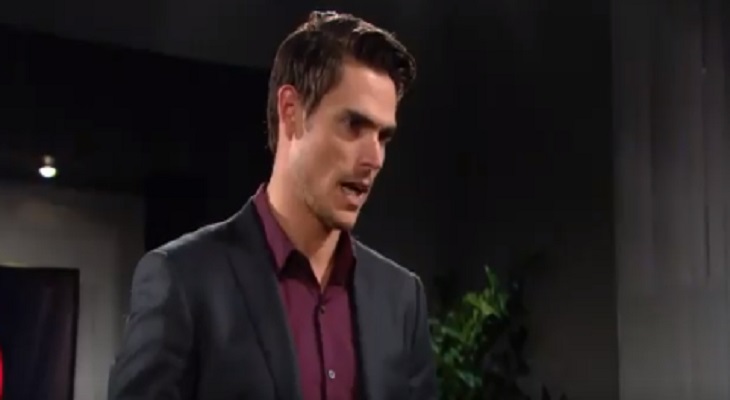 “The Young and the Restless” spoilers for Thursday, June 6, tease that Phyllis Summers (Gina Tognoni) will drive a hard bargain. At the tack house, she’ll manage to get Adam Newman’s (Mark Grossman) payment up to $2.5 million before she gets started. Phyllis nearly has a crisis of conscience once she hacks into Dark Horse’s servers, but Adam keeps her eye on the prize.

Soon after, Adam looks on the screen and realizes he’s got the leverage he needs. The company has massive loan debt, so Adam buys the loan and plans to hold it over Nick Newman’s (Joshua Morrow) head. He intends to use this to get custody of Christian Newman (Jude and Ozzy McGuigen), but Phyllis notes that the kid means a lot to Nick. As Adam exits, he instructs Phyllis to show herself out and lock up.

At Dark Horse, Rey Rosales (Jordi Vilasuso) has uncovered surprising news. He tells Nick that Adam’s been trying to find Chloe Mitchell (Elizabeth Hendrickson). Nick’s baffled since Chloe was dead last he heard. He points out that Chloe tried to kill Adam, so Rey thinks she might’ve gone after him again. Nick counters that maybe this is about following any lead that could bring Adam to Chelsea Newman (Melissa Claire Egan) and Connor Newman (Gunner and Ryder Gadbois).

To commit or not to commit? Can a father stop a war? Tune in to #YR this week to find out the answers! pic.twitter.com/t1u8GMdymx

Rey returns to the cottage and fills Sharon Newman (Sharon Case) in later. She contends that maybe Adam just wanted to be certain of Chloe’s demise. Rey is wary of Adam and how far he’ll go to get what he wants. Next, Sharon heads over to the tack house and runs into Phyllis. She grills her, but Phyllis advises Sharon to ask Rey since he’d probably like to know how worried she is about Adam.

Back in her suite at the GCAC, Phyllis gazes out the window and ponders. She’s taken aback when someone sneaks up behind her and uses a needle to inject her. At Society, Lola Rosales (Sasha Calle) lets Kyle Abbott (Michael Mealor) know that his proposal happened too soon. She’s just not ready, so Kyle beats himself up for even asking.

Lola takes off, so Kyle opens up to Jack Abbott (Peter Bergman) about the incident. Summer Newman (Hunter King) listens in and seems a bit down. However, she tells Theo Vanderway (Tyler Johnson) it might be for the best. Summer opts to let predictable people get married and keep doing her own thing.

After getting Rey’s advice to wait on marriage, Lola returns in time to hear Summer’s view of the situation. At their apartment, Lola finds Kyle waiting with an apology banner. He’s sorry for rushing into things, but Lola’s had a change of heart. Summer’s comment convinced Lola to say yes, so they make love in celebration.

At the coffeehouse, Tessa Porter’s (Cait Fairbanks) having a bit of a freak-out over her performance at Society. Mariah Copeland (Camryn Grimes) calms Tessa down and insists on taking care of her meeting with Devon Hamilton (Bryton James). She encourages Tessa to breathe and focus on her gig while she heads to the penthouse.

Devon’s surprised to see Mariah in place of Tessa, but he understands once she clears things up. Mariah also explains why Tessa and Ana had to part ways. Devon gets that their visions were different and doesn’t hold it against Tessa. Talk turns to GC Buzz, which Mariah wants to leave. She’d rather so something creative behind the scenes, so Devon suggests Mariah run Power Communications.

Mariah isn’t sure she’s qualified to take over Neil Winters’ (Kristoff St. John) PR company, but Devon works to convince her. He doesn’t think Mariah will fail. Back at Society, Tessa performs and earns praise from the crowd. When she’s done, she meets back up with Mariah and learns about her job offer.

Young And The Restless Spoilers – Adam’s Ultimatum For Nick

Meanwhile, Adam makes his way to Dark Horse and delivers an ultimatum. He reveals that he’s purchased the $27 million loan and owns Nick now. Adam insists Nick has 24 hours to decide between Dark Horse and Christian.

Get excited! 👏 @LauraleeB4real and @DougDavidsonYR are going LIVE tomorrow on the #YR Facebook page. Tune in at 3:00pm ET/12:00pm PT to chat with them. 🌟 pic.twitter.com/dWz2a4pCnq

“The Young and the Restless” spoilers say another exciting episode’s coming up. We’ll give you updates as other Y&R details and rumors emerge. Stay tuned to see what’s next in Genoa City.