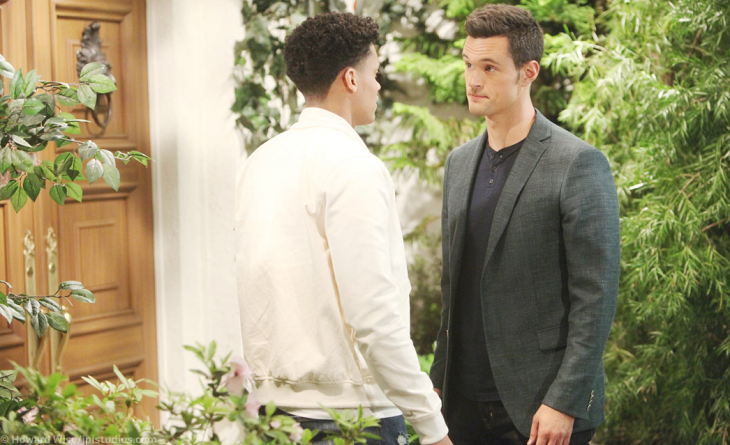 The Bold and the Beautiful spoilers for Friday, June 7, tease that Xander Avant (Adain Bradley) will cause a major scene. He’s just burst in on Liam Spencer (Scott Clifton) and Hope Spencer’s (Annika Noelle) annulment signing, yelling “Stop!” and telling Liam and Hope that they can’t sign the papers.

Hope, Liam, and Carter Walton (Lawrence Saint-Victor) were stunned by Xander’s sudden interruption, and on Friday’s B&B episode, they’ll all struggle to understand what’s going on with him. Xander’s usually pretty laid-back, and seeing this more intense, agitated side of him will take them all by surprise.

As B&B viewers know, Xander is insistent that Hope and Liam learn the truth that their daughter Beth Spencer is actually alive and thriving with Steffy Forrester (Jacqueline MacInnes Wood) as Phoebe Forrester (River Davidson and Madeline Valdez).

Bold And The Beautiful Spoilers – Every Intention Of Spilling

He’s absolutely disgusted with Zoe Buckingham (Kiara Barnes) and Florence “Flo” Fulton (Katrina Bowden) for conspiring to keep the secret as long as they have.

And that’s what led Xander to track down Hope and Liam, and he’s got every intention of telling them the truth right then and there. But will he? The Bold and the Beautiful spoilers indicate that despite his efforts, something or someone is going to prevent him from revealing the secret. Instead, B&B spoilers say that the truth will be kept from Hope and Liam a bit longer.

In fact, B&B spoilers say that Lope will go through with the annulment, so one way or another, those papers are going to get signed. That means that something’s going to happen that will keep Hope and Liam from learning the truth from Xander. But what will it be?

Bold And The Beautiful Spoilers – Will Someone Intervene?

Well, one possibility is that Thomas Forrester (Matthew Atkinson) will thwart Xander’s attempt to spill the Beth secret. Thomas was upstairs eavesdropping on Hope and Liam’s meeting with Carter, and he heard Xander burst onto the scene. Might Thomas do something to get rid of Xander before Xander has a chance to spill the truth?

Another possibility is that Zoe will track Xander down at the house and intervene. Xander thinks that he left Zoe at Forrester Creations with Flo, but she might have slipped away and followed Xander. B&B viewers could see Zoe burst in and drag Xander out of there.

It’s hard to imagine Xander being dissuaded from spilling the truth at this point, but ongoing B&B spoilers indicate that the truth isn’t going to come out just yet. There will be more twists and turns in this story before we see its resolution and Hope and Liam get their daughter back.