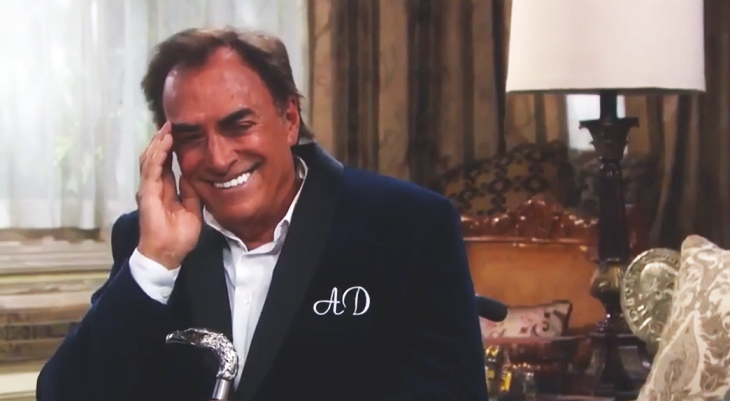 Days of Our Lives summer spoilers tease that summer means romance, complete with reunions, beach bods, fireworks, several returns, an engagement, four weddings, an anniversary and a Fourth of July celebration. Fans will also be treated to a remembrance of an iconic character and family matriarch. There will be some surprises, however, that Days of Our Lives viewers won’t believe!

Ben Weston (Robert Scott Wilson) and Ciara Brady (Victoria Konefal) put on the nines on a real fancy date in the first scene, with him in a suit and her in a party dress. He nuzzles her neck as she asks him what he’s doing, and he responds if she has to ask he’s not doing it right.

Next we see a set of Brady twins reunite as Eric Brady (Greg Vaughan) gives a bear hug to returning Alison Sweeney who reprises Sami Brady DiMera, and shouts excitedly, “We’re all going to be together!” She’s undoubtedly enthused about the annual Brady/Horton barbeque which is being hosted by Rex Brady (Kyle Lowder) and Sarah Horton (Linsey Godfrey) this year.

Days Of Our Lives Spoilers – Marking A Sombre Occasion

The Bradys will gather for a more somber occasion too, to remember their family matriarch Caroline Brady (Peggy McKay) who passed away in real life as well. Days of Our Lives viewers will see a scene from that gathering as well, as Kayla Brady Johnson (Mary Beth Evans) toasts “Mom” with tears in her eyes.

Xander Kirakis (Paul Telfer) works on a beach bod that slays and then plays superhero to a shocked Brady Black (Eric Martsolf) who looks at him like he’s lost his mind! That won’t be Brady’s only shock this summer, as fake Nicole Kristen DiMera (Stacy Haiduk) tries to seduce him – as Susan Banks!

Days Of Our Lives Spoilers – Weddings And Anniversaries

There will be a huge anniversary celebration for John Black (Drake Hogestyn) and Marlena Evans (Deidre Hall), as well as four weddings during the summer. Many Salem residents will make returns, among them Belle Black (Martha Madison), Shawn Douglas-Brady (Brandon Beemer) and Andre DiMera (Thaao Penghlis), who is shown in a smoking jacket with the intials “AD” so now we know it’s Andre.  Also returning are Anna DiMera (Leann Huntley) and Lucas Horton (Bryan Dattilo) in addition to Sami Brady DiMera.

Days Of Our Lives Spoilers: Marlena Is On To Claire– Did She Figure Out She Set Cabin Fire? https://t.co/WsPiNkHO8F pic.twitter.com/KcG3HLyp4B

There will also be plenty of surprises; we see Abe Carver (James Reynolds) trying to suppress a giggle, and Jack Deveraux (Matthew Ashford) gets his memory back, much to the pleasant surprise of Jennifer Deveraux (Melissa Reeves). Sami gets in a cat fight with fake Nicole Walker (Adrienne Zucker), or will it be the real one by the end of the summer? That’s actually not much of a surprise -they’re old rivals!