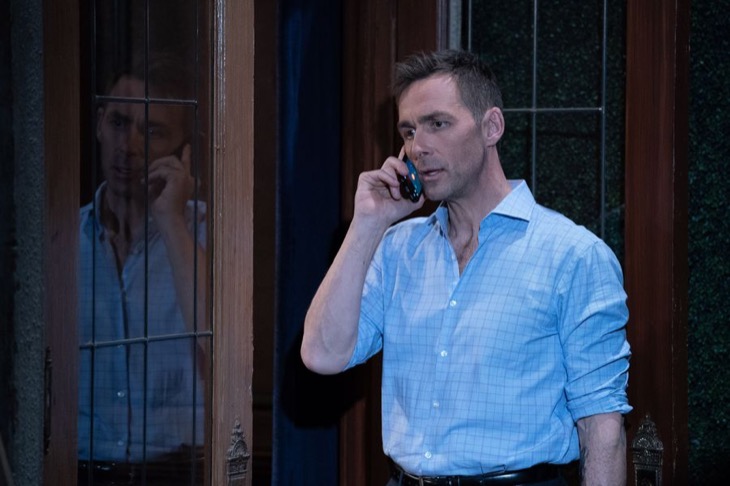 General Hospital spoilers tease that Valentin Cassadine (James Patrick Stuart) won’t be carrying Nina Reeves (Cynthia Watros) out of any burning buildings anytime soon by his own admission, cracking a joke in the process of tweeting about cracking a rib! Technically, General Hospital could have gotten a stunt double to do that, but apparently, Stuart actually carried Michelle Stafford, who played Nina until very recently, out of the burning barn set himself!

Stuart apparently had a minor skiing accident last week and cracked a rib, and tweeted that he is glad he doesn’t have to do any scenes like that anytime soon. General Hospital viewers will recall Valentin carrying Nina out of the burning barn when Peter August (Wes Ramsey) was also rescued after being kidnapped and tortured by a grief-stricken but revenge-seeking Liesl Obrecht (Kathleen Gati) after the death of her only son, Nathan West (Ryan Paevey).

Cracked a rib skiing last week. Thank goodness I don’t have to carry Nina out of any burning barns.

Cracked ribs are nothing to fool around about, although unless a rib is actually fractured inward they are usually not dangerous. A fractured rib cracked inward can puncture a lung, but usually when they are just cracked medical professionals will x-ray to be sure, but don’t even wrap the patient up anymore; they have found that wrapping the ribcage can hinder breathing and encourage pneumonia to develop because there is usually some swelling and bruising associated with a cracked rib.

GH Spoilers: Valentin Won’t Have A Lot To Laugh About Soon

We probably won’t see Valentin laughing a lot either, since heavy laughing can be painful with a cracked rib, but as the storyline should be moving towards Nina’s finding out he set her up with a fake daughter about the time Stuart cracked his rib in real life, Valentin isn’t going to find a lot of things funny anyway!

Stuart hasn’t indicated doing anything differently or taking any time off from General Hospital in his Twitter or Facebook accounts, and he has been tweeting away ever since the skiing incident happened, so he’s probably not in a lot of physical pain, although his General Hospital alter-ego may be headed for some emotional pain! Stay tuned to General Hospital and keep checking General Hospital spoilers frequently for all the latest news, updates and developments!