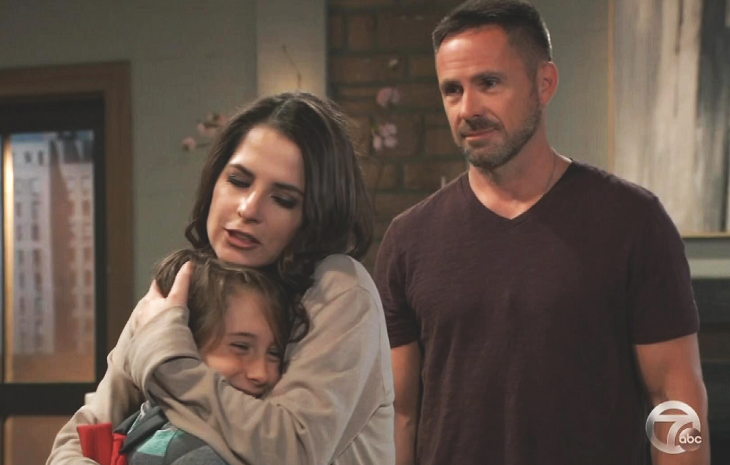 General Hospital spoilers tease that the new Danny Morgan that GH snuck into the Friday, May 31 episode is named Porter Fasullo. Young Porter has been a model and an actor, however this may be his first soap opera role and possibly his first acting role.

To give newer General Hospital viewers a little history on Danny, he started out with an uncertain paternity thanks to the dirty tricks of Franco  Baldwin (then played by James Franco) during Jason and Sam’s honeymoon in Hawaii.

The couple had married on September 22, 2011 and during the honeymoon Sam became pregnant. However she didn’t know it until January, 2012 when she missed a full period and took a pregnancy test. Franco, who at the time was strangely obsessed with Jason, (due to a brain tumor which was diagnosed and removed after Roger Howarth took over the role) followed the couple on their honeymoon. He then led them to believe that he had raped Sam with Danny as the result, but all he was doing was playing a twisted mind game.

Danny's birthday proves to be extra special for Jason and Sam. Their decision is long overdue.#GH is brand-new and starts RIGHT NOW on ABC! @1SteveBurton pic.twitter.com/B1nnAa7Qkv

However, a paternity test later showed the truth and confirmed Jason as Danny’s father. Danny was born full-term but in interesting circumstances, as Sam inadvertently went into labor in John McBain’s (Michael Easton) motel room during a torrential rainstorm. Later, Danny was switched with Tea Delgado’s (Florencia Lozano) dead child by Heather Webber (Robin Mattson) who felt sorry for Todd Manning (Roger Howarth) because Tea’s dead child was his nephew.

Sound familiar? It would seem GH recycled the storyline with Brad Cooper (Parry Shen) and Nelle Benson (Chloe Lanier) with slight modifications! This was before the Prospect Park lawsuit when the characters of Silas Clay had to be created for Michael Easton, Roger became Franco, and Todd’s daughter Starr Manning (Kristen Alderson) became Kiki Jerome, later being replaced by Hayley Erin when Kristen decided to leave GH.

General Hospital Spoilers – Returned To His Mother And Father

The right babies were revealed and Danny was eventually returned to Sam by Jason, who had unearthed the baby switch after a deadly pathogen scare perpetrated by Jerry Jacks (Sebastian Roche).

Later, after Jason is presumed dead, Danny comes down with leukemia and receives a successful bone marrow transplant from new Port Charles businessman Derek Wells, who turns out to be Julian Jerome (William DeVry) who at about the same time is revealed to be Sam’s birth father!

Porter has already done a fine job as the new Danny on his premiere episode. Stay tuned to General Hospital and keep checking General Hospital spoilers frequently for all the latest news, updates and developments!