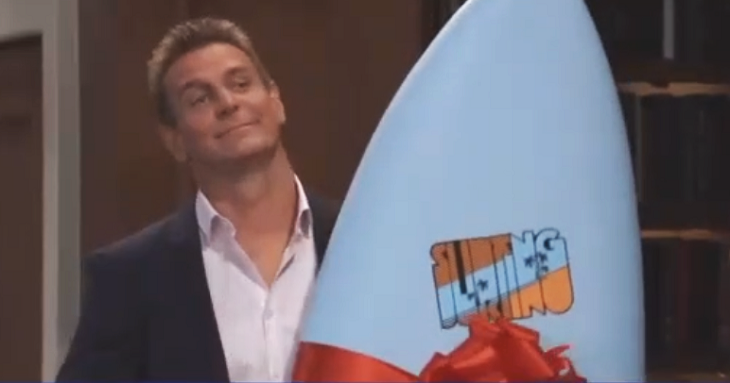 “General Hospital” spoilers for Friday, June 7, tease that Nina Reeves (Michelle Stafford) will let Maxie Jones (Kirsten Storms) vent and then get a chance to do the same. Once Maxie’s done saying what she has to say, she’ll tell Nina it’s her turn. Maxie will insist Nina should let her rip, so she’ll listen up and hope she can help.

Nina will certainly bring Maxie up to speed on the crazy promise she made. She vowed to boost circulation at Crimson within three months, so Maxie may have some concerns about that. It’s not a very big window to make this happen. Nevertheless, Nina and Maxie know how to get stuff done, so they’ll put their heads together and create a plan to seal their success.

Meanwhile, Jasper “Jax” Jacks (Ingo Rademacher) will stun Carly Corinthos (Laura Wright) when he appears with a large surfboard. Carly will note that Jax must have an explanation. She’ll tell him to start talking, so Jax will reveal his motives. Maybe Jax will have a fun trip in mind for Josslyn Jacks (Eden McCoy) to get her mind off her grief. The surfboard could be part of the surprise.

Carly may not be quite on the same page with Jax on Friday, but he’ll defend his point of view and try to help. Let’s hope things work out the way Jax wants!

At Charlie’s Pub, Ava Jerome (Maura West) will be joined by a giddy Franco Baldwin (Roger Howarth). He’ll insist he comes bearing good news, so he may tell Ava about Ryan Chamberlain (Jon Lindstrom) slipping into a coma.

At GH, Laura Webber (Genie Francis) will support Dr. Kevin Collins (Jon Lindstrom) as he deals with complicated feelings. He’ll suggest that his brother is hard to kill, so there should be a double meaning there. Ryan has escaped death on many occasions, but this is about Kevin’s deep, dark desires as well. After everything that Ryan’s done, there’s a piece of Kevin that wants to take his twin’s life in retaliation.

At the same time, that’s not who Kevin is. He’d struggle to cause the death of a helpless individual, even if that helpless individual is someone as sinister as Ryan. Over with Elizabeth Baldwin (Rebecca Herbst), she’ll mention Jordan Ashford’s (Briana Nicole Henry) DNR to T.J. Ashford (Tajh Bellow), Curtis Ashford (Donnell Turner), Stella Henry (Vernee Watson) and Dr. Hamilton Finn (Michael Easton). It’ll cause quite a stir in Jordan’s family.

Stella already knows about this and intends to defend Jordan’s wishes if it comes to that. She’ll do whatever she can to soothe Curtis and T.J.’s concerns. Stella may point out that the surgery could go off without a hitch. She’ll push T.J. and Curtis to trust that Jordan has the strength to come back to them.

Other “General Hospital” spoilers state that Sasha Gilmore (Sofia Mattsson) will continue to let her guard down. She’ll plan another date with Michael Corinthos (Chad Duell) and perhaps lull herself into a false sense of security. Things are going great for Sasha, but her downfall is looming. That’s because Sasha’s lying about being Nina’s daughter and scheming with Valentin Cassadine (James Patrick Stuart).

General Hospital News: James Patrick Stuart Shares How Valentin Could Get Away With His Lies To Nina on GH https://t.co/E5nd9IB7ap