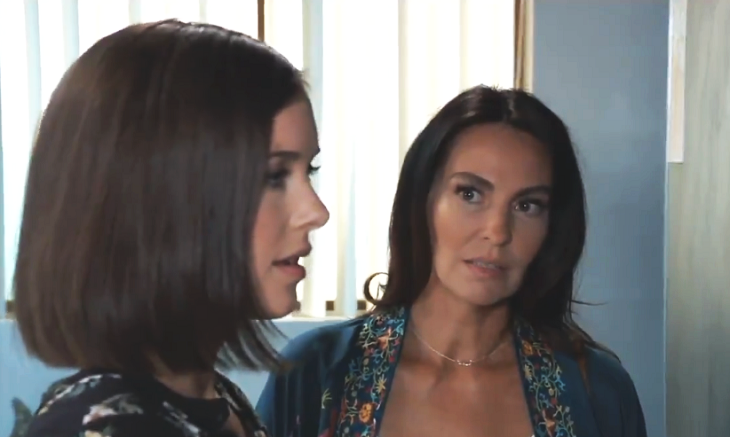 Ava wants to see Avery Corinthos (Ava and Grace Scarola), but Jocelyn Jacks (Eden McCoy) has taken her to the zoo. Sonny asks Alexis to call first next time. Sonny asks Ava about the confrontation with Ryan. Ava tells them the Harrison Chase (Josh Swickard) stopped her from shooting him. She says Ryan told her she couldn’t kill him and she showed him she was capable.

Ava tells Sonny and Carly that Ryan survived and donated a kidney to Jordan Ashford (Briana Nicole Henry). Carly understands how Ava feels when it comes to the person who killed her child being free. Alexis stops by and asks Carly to keep an eye on Lucas Jones (Ryan Carnes). Alexis tells Carly and Sonny who the baby’s parents are. Alexis explains what she needs Carly to do.

General Hospital’s Franco Baldwin (Roger Howarth), Laura Webber (Genie Frances), Kevin Collins (Jon Lindstrom), and Hamilton Finn (Michael Easton) are waiting for Ryan to get out of surgery. Franco says it is taking too long for the surgery. Finn gets a text and goes to see if the kidney is ready to be transplanted. Finn goes to check on Ryan to see why he hasn’t woke up. Franco wants to know if Kevin could kill Ryan. Franco tells Kevin his patients would miss him if he went to Pentonville. Kevin leaves Ryan’s room. Ryan slips into a coma.

Finn comes in and informs Jordan that kidney checked out and asks if she’s ready for the transplant. Finn explains the surgery, and Liz comes to take her to the ER. Jordan wants to talk to Stella Henry (Vernee Watson) alone first. Jordan tells Stella that she signed a DNA and wants her to make sure they stick to it. Stella wants Jordan to leave her out of this. Jordan knows Stella is the only one who can speak up for her. Stella agrees to do what Jordan asked. Jordan goes into surgery.

General Hospital’s Harmony Miller (Inga Cadranel) pushes Willow Tait (Katelyn MacMullen) to tell her where the baby is. Willow tells Harmony her baby died. Harmony pushes Willow to open her heart and give her the answers she wants. Harmony tries to convince Willow that Shiloh Archer (Coby Ryan McLaughlin) won’t hurt her or her child. She tells Willow she needs to broker a truce between Willow and Shiloh.

Harmony says Shiloh will only keep his temper in check for so long and Willow doesn’t want to see the consequences. Harmony says Willow confirmed everything she needs to know because her passion proves the baby is alive. Willow tells Harmony that the pledges have been destroyed, she doesn’t believe her. Margaux plans to take Harmony down with Shiloh. Margaux tells Laura she is resigning as D.A.

General Hospital’s Julian Jerome (William DeVry) tells Alexis Davis (Nancy Lee Grahn) that he knows she is getting ready for a huge custody battle. Julian tells Alexis everything he knows about Wiley Cooper Jones’ (Theo and Erik Olson) case. Julian tells Alexis he has a way to help with the case. Alexis wants Julian to stay out of the case before he tanks it. Julian insists that his son needs him. Alexis pushes him to leave well enough alone.

Julian asks Alexis how it’s ok for her to bend the law to help her family, but he can’t do the same. He tells Alexis if Kristina Corinthos-Davis (Lexi Ainsworth) knew she could come to Alexis, she would have never gotten into DOD. Julian goes to Willow and tells her Diane Miller’s (Carolyn Hennesy) file on the adoption needs to be destroyed. Julian says Willow will have to destroy the papers herself. Willow calls Diane and frantically asks to speak to her. Chase calls Willow and tells her the charges against Shiloh.

General Hospital’s Shiloh accuses Chase of harassment by arresting him. Margaux Dawson (Elizabeth Hendrickson) arrives and tells Shiloh she knows he was arrested, she requested the warrant. Margaux tells Shiloh he’s going away for 20 to life. Shiloh tries to force Margaux’s hand; she shows him her pledge.

Shiloh threatens to tell what he knows and ruin her career. Margaux tells Shiloh that she has resigned as D.A. She is going to leave the best case she can for the new D.A. Margaux is going to investigate his true identity first. Harmony tells Shiloh that he was right; his child is alive. Harmony lies to Shiloh about knowing the sex of the baby.