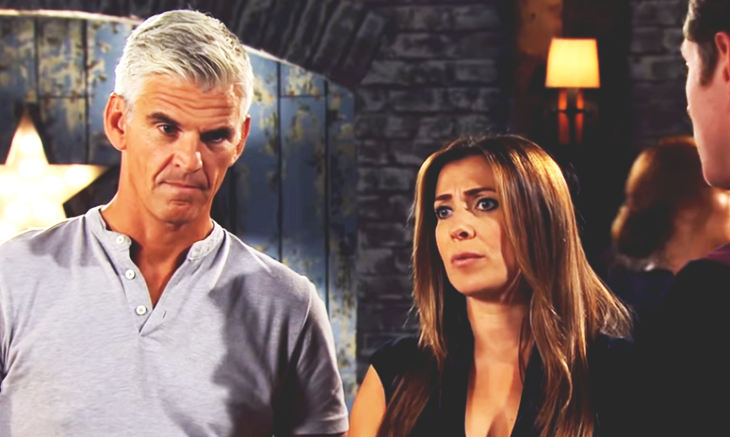 Coronation Street spoilers indicate that Michelle Connor (Kym Marsh) will soon drop a bombshell on Robert Preston (Tristan Gemmill) after she goes on a date with Michael Bailey (Ryan Russell).

After things don’t go quite the way Michelle had hoped, she has a change of heart about Robert and ends up opening up about her feelings to him. Here’s what you need to know.

It begins with Michael tracking Michelle down at the Bistro and asks if she would like to go have a few drinks on an impromptu date with him. Michelle is surprised when Robert even encourages her to do so, even though he’s trying to put a brave face on at the same time.

Coronation Street Spoilers – Michelle Connor Has Her Own Plan

The date goes surprisingly well until Michael invites Michelle back at his place. And that’s not because Michael has a few things in mind. Instead, Michelle is taken a back when she realizes that Michael’s supposed bachelor pad is actually his mother and father’s house.

Despite their not-so-successful date, Michelle teases Michael a little bit on the street the next day. During the same time, Robert admits that he misses Michelle and that he also blames himself for ruining their relationship. Little does Robert know that Michelle had actually heard his confession and decides to come up with a plan of her own.

Later on, Daniel Osbourne (Rob Mallard) rushes to find Robert as he needs his help with an emergency at the Bistro. At least, that’s what Robert thinks. Instead, he ends up finding Michelle there all alone and waiting for him. She has a candlelight dinner set up and has a confession to make.

She tells a stunned Robert that she still loves him and that she wants to give their relationship another try. Thankfully, Robert tells Michelle that he wants the same thing and that he’s always loved her. However, he’s also got a secret that he’s keeping from her.

"Michelle! We need to talk!"

Can you see any way for Robert and Michelle to work this out? Here's a little hint from Kym Marsh: https://t.co/2Y2D01tCP2#Corrie #Robert #Michelle pic.twitter.com/HjhoAnRcW1

Michelle can’t help but feel suspicious when Robert says that he needs to take off because he is meeting someone. Fans will have to tune in to find out what will happen next!