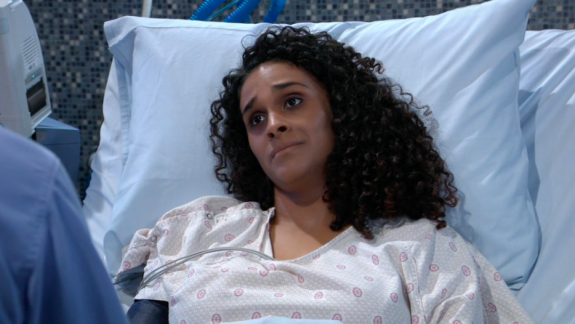 Jacks believes surfing is good for Jocelyn. Carly confides in Jacks that she is worried about Jocelyn. Jacks tells Carly that Drew Cain (Billy Miller) has no say in his half of the company.

Carly wants Jacks to tell Jocelyn that he’s staying in town but asks him to keep the peace with Sonny. Carly goes to the doctor for more tests and waits for the results.

General Hospital Spoilers: Maxie West Has A Plan For Crimson

General Hospital’s Maxie West (Kirsten Storms) tells Sasha Gilmore (Sofia Mattsson) and Nina Reeves (Michelle Stafford) that Ava Jerome (Maura West) is the perfect person to be on the cover of Crimson. Nina says there is no way Ava is going to be on the cover.

Sasha goes to meet Michael Corinthos (Chad Duell) who wants to take her to Martha’s Vineyard. Nina gives in and goes to track down Ava. Maxie says if this works out Ava will get what she deserves.

General Hospital’s Franco Baldwin (Roger Howarth) meets with Ava and tells her that Ryan Chamberlain (Jon Lindstrom) is in a coma. Franco believes the worst is over, Ryan is in a coma, down a kidney and going to prison. Ava says she can’t get Ryan out of her head; he’s taunting her.

Franco tells Ava she needs to move on and not look back. Ava says it’s time for her to start her life over and talks about sleeping with her daughter’s boyfriend. Franco says he knows all about starting over.

General Hospital’s Kevin Collins (Jon Lindstrom) and Laura Webber (Genie Frances) are discussing Ryan. Kevin tells Laura that Ryan is hard to kill. Laura tells Kevin that he saved someone’s life; Ryan would have never willingly given up that kidney. Kevin says his only choice was to stop his brother.

Kevin obviously posed as Ryan and signed the donation papers. Kevin plans to cut all ties with Ryan. Laura tells Kevin that not everyone who went through what Ryan did turns out to be serial killers. Ryan is wheeled away and into an elevator.

WATCH: Laura knows that now is the time for Kevin to move on from Ryan. @GenieFrancis @thejonlindstrom #GH pic.twitter.com/jnovC0f1yQ

Stella and T.J. reassure Curtis. Finn and Liz say that Jordan is going to be fine. Finn allows Curtis to see Jordan. Jordan wakes up, and Curtis welcomes her back. Liz goes to update Kevin and Laura while Stella decides to cook for Jordan and Curtis. Jordan still can’t believe Ryan changed his mind.