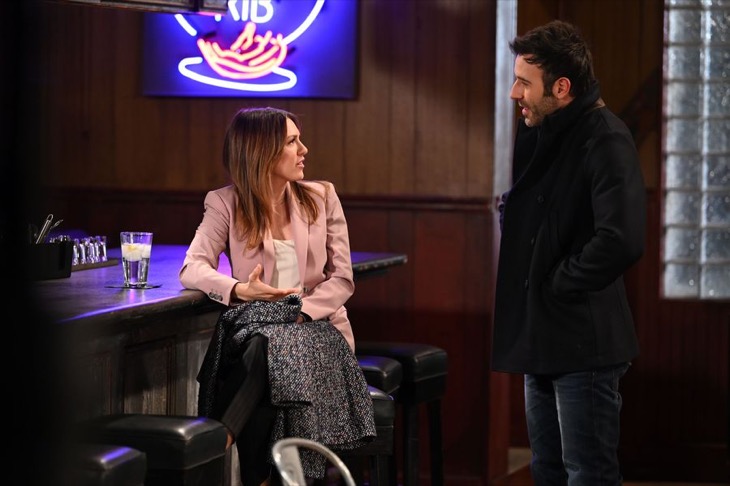 General Hospital spoilers tease that Elizabeth Hendrickson has indeed left General Hospital and the role of District Attorney Margaux Dawson permanently! Elizabeth has apparently completed all her General Hospital filming and has left for The Young and The Restless full-time, as opposed to what she was quoted to say earlier, that she was going to try to do both at the same time.

Elizabeth Hendrickson Will Resume Her Role On Y&R

On The Young and The Restless, Elizabeth will be reprising her role of Chloe Mitchell, a manipulative bad girl who split up Cane Ashby (Daniel Goddard) and Lily Winters (Christel Khalil) because she wanted Cane for herself. Chloe also suffered a string of broken relationships and had a daughter named Delia Abbott (Sophie Pollono) with Billy Abbott (played by Billy Miller at that time), who sadly died in a car accident after having survived leukemia. Later she got involved with Kevin Fisher (Greg Rikaart) and had another little girl, Bella Mitchell (Cali May Kinder). Elizabeth left the role and Chloe left town in 2017.

As General Hospital viewers know, District Attorney Margaux Dawson came to Port Charles a bit over a year ago, May 29, 2018, to be exact. She came with an agenda to prove Sonny Corinthos (Maurice Benard) killed her father, and if she couldn’t prove that, she was going to find something else to prosecute and convict him for.

What Is Going To Happen To The Flash Drive?

She even kept the flash drive with Drew Cain’s (Billy Miller) memories on it hoping to get some intel from his Jason Morgan (Steve Burton) memories to take down Sonny with! Sonny turned the tables on her by finding out her mother had an affair with his boss and had ordered the hit, and gave Margaux her mother’s love letters as proof.

Of her time on GH, Elizabeth wrote on Instagram: “It was an incredible year at @generalhospitalabc playing Margaux. Thanks to all my new friends, It was truly one of the best experiences I’ve ever had. On to the next!” Stay tuned to General Hospital and keep checking General Hospital spoilers frequently for all the latest news, updates and developments!