General Hospital Spoilers: Hayden Returns With An Agenda – Is She Conspiring With Jax? 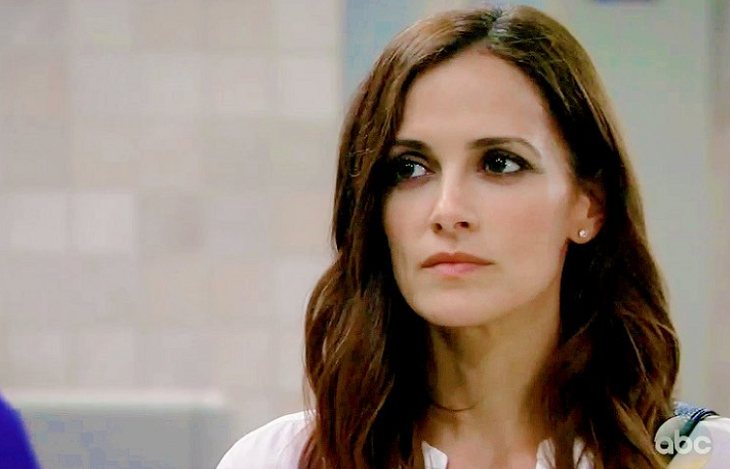 General Hospital spoilers tease that Hayden Barnes (Rebecca Budig) will return with an agenda, and when she does, Dr. Hamilton Finn (Michael Easton) will be dealing with a medical mystery. As General Hospital viewers will recall, when Hayden bailed on Finn at the altar when they were to be married, she was pregnant with his child. She lied that the baby lived and later wrote Finn a letter later saying that she miscarried.

General Hospital has not released the time-frame for Hayden’s return to Port Charles, but you can almost bet on it being while Anna Devane (Finola Hughes) is out of the country tracking down intel from her sister Alex Marick (Finola Hughes), now that Anna and Finn are engaged!

Hayden, as General Hospital viewers will recall, was really Rachel Berlin, the daughter of Raymond Berlin (Robert Curtis Brown) and Naomi Drefyus (Robin Riker). Raymond was a well-known Wall Street financier who wound up in prison after being involved in a Ponzi scheme.

And Hayden, after doing some investigation into her family, found out that her real father was Jeff Webber (Richard Dean Anderson). Hayden was the result of an affair between Jeff and Naomi.

She therefore found herself being the half-sister of Elizabeth Webber Baldwin (Rebecca Herbst) and the two did not get along at all until they found out they were half-sisters and called a truce and got to know each other better.

Hayden, however, seemed to have financial savvy perhaps learned rather than inherited from Raymond, and at one time was handling financial matters at ELQ for Tracy Quartermaine (Jane Elliot). She fled Port Charles, Finn, and their wedding when she was blackmailed by her ex-husband Jared Preston (Rob Corboy) who threatened to expose her DWI hit-and-run killing of a child, which he had taken the heat for and done the time for and had come to Port Charles after Hayden.

With Hayden in the financial world and having worked with both Raymond Berlin and ELQ at one time, her expected return to Port Charles seems to be very close and coincidental to that of Jasper Jacks (Ingo Rademacher). Could they be in cahoots with each other? And could he have plans to bring Hayden aboard at Crimson, if Nina Reeves (Michelle Stafford) and Maxie Jones (Kirsten Storms) can’t get the balance sheet to look the way Jax wants it?

Shortly before Hayden became pregnant, Finn had cured her from Blackwood’s Syndrome, which he himself had finally been cured from after developing a protocol with the help of Roxie the Bearded Dragon! Finn will have a medical mystery to solve when Hayden shows up.

Could their child either have some type of rare, possibly terminal illness that Finn will have to find a cure for, or could the baby possibly have some kind of birth defect possibly in its blood because of either the Blackwoods Syndrome or Finn’s cure for it? Worse yet, will he have to use his own child as a guinea pig to develop the cure? Stay tuned to General Hospital and keep checking General Hospital spoilers frequently for all the latest news, updates and developments!