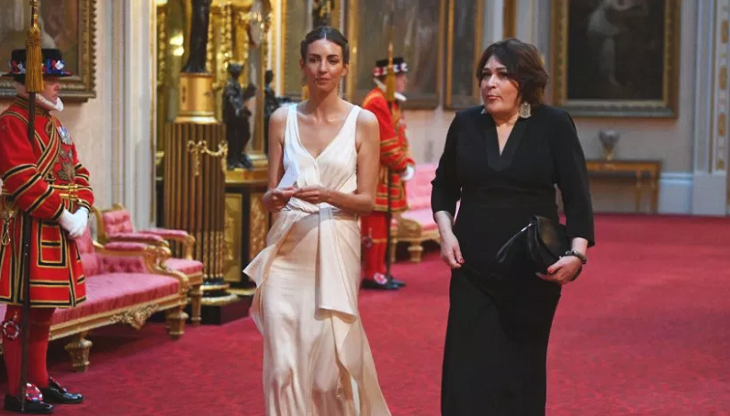 It looks like no matter how hard Prince William is trying to bury the Rose Hanbury reports in the press, they just won’t go away. That’s because the Marchioness of Cholmondeley made a rare appearance at the State Banquet in Buckingham Palace.

Even though she turned up rather late and was the last person to enter the banquet room, she was there along with Queen Elizabeth, the Duke and Duchess of Cambridge, Prince Charles and Camilla Parker-Bowles and of course, President Donald Trump and his entire family, including his four children Ivanka, Tiffany, Eric and Donald Jr.

According to Hello! Magazine, Rose Hanbury looked very elegant in an off-white floor length gown for the banquet. She is best known as the wife of Lord Great Chamberlain.

Two Women Used To Be Great Friends But Had A Rift

They live at Palladian Houghton in Norfolk, just a few short miles away from Prince William and Kate Middleton. They also have three children together: Alexander (the Earl of Rocksavage), Oliver (Lord Cholmondeley) and Lady Iris.

This evening The Duke and Duchess of Cambridge attended the #USStateVisit Banquet, hosted by Her Majesty The Queen at Buckingham Palace. pic.twitter.com/wEiEiA5CfK

Even though Kate Middleton and Rose Hanbury used to be very good friends, multiple reports have suggested that they have had a rift and are no longer on speaking terms.

As a matter of fact, there were even some reports that suggested the Duchess of Cambridge was looking to “phase out” Rose from their social circle in Norfolk. So far Buckingham Palace has not made any comments about the reports.

She Wasn’t Seated Anywhere Near Prince William Or Kate

And while Rose looked very elegant at the banquet, it doesn’t appear as though she was seated anywhere next to Prince William and Kate Middleton. A lot of royal observers also couldn’t help but notice that Rose was the last one to arrive at the banquet, despite her husband’s status in the monarchy.

The other sixteen members of the royal family that attended the dinner with the Trumps included the Duke of York, the Earl and Countess of Wessex, the Princess Royal, Vice Admiral Sir Tim Laurence, the Duke and Duchess of Gloucester, the Duke of Kent, Prince and Princess Michael of Kent and Princess Alexandra.