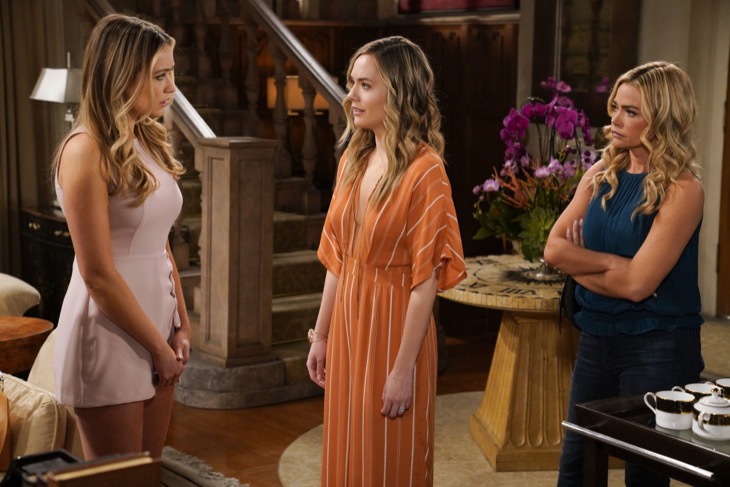 The Bold and the Beautiful (B&B) spoilers tease that the Beth Spencer reveal is approaching in the coming months. And, when the truth finally makes its way back to Liam Spencer (Scott Clifton) and Hope Logan (Annika Noelle), it will be too much for them to bare.

Not only will they have to digest that their daughter never died, but Flo Fulton (Katrina Bowden) had a part in the swap. And, as a particularly cruel twist, Steffy Forrester (Jacqueline MacInnes Wood) adopted Hope’s daughter.

Executive producer and head writer Brad Bell said that when Hope finds out the truth, she will lose it and we’ll see a Hope that B&B had never shown. She will be more than upset about the whole situation. The baby swap ruined her life and forced her hand to end her marriage. She will want answers from Flo and it’s likely she won’t get the answers she craves.

Hope Will Unravel After Beth Reveal

While it’s true that the news that Beth never died will be comforting to Hope, the realization that her life could have been different will be a hard pill for her to swallow. She will not be able to fathom how Flo and Reese Buckingham (Wayne Brady) could carry out such a cruel plan. And, the B&B spoilers tease, she will want answers on why Flo agreed to do it.

B&B spoilers state that Flo will explain that she thought Reese was in love with her and she agreed to do it to make him happy. It isn’t clear if Flo will disclose that she got a hefty $50K for pretending to be Phoebe/Beth birth mother.

The Bold and the Beautiful spoilers state that Hope will come unglued at Flo and she will let her know that they may be blood relatives but she wants nothing to do with her. She cannot believe that Storm Logan’s (William DeVry) daughter could stoop so low.

Today on #BoldandBeautiful, Hope and Liam are surprised when Xander barges in and tells them he needs to speak to them before they do anything they may later regret. pic.twitter.com/9DgnHStDoF

While the truth will sting Steffy as she realizes her adopted daughter is Hope’s baby, she will rise to the occasion and support Hope. She will let her know that while she doesn’t want to give up Phoebe, she understands that she belongs with her parents and will hand her over to Liam and Hope.

The part that isn’t clear is, will Steffy already be pregnant with Liam’s baby by then? Or will Hope and Thomas Forrester (Matthew Atkinson) be an official couple? There are so many ways that Bold and the Beautiful could go with this storyline.

We got some time to figure it out too because Bell is still giving the timeline of the fall for it all to come out. Don’t forget to come back to Bold and the Beautiful (B&B) spoilers, news, and casting update