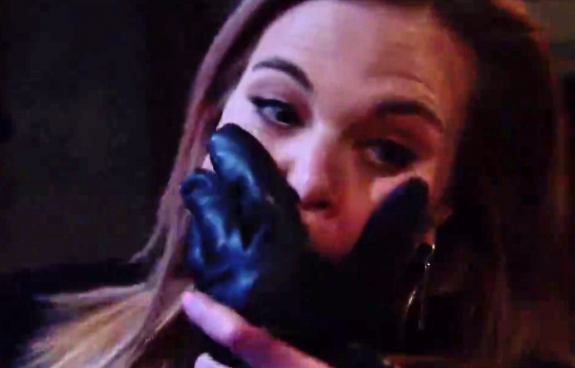 She hopes the redhead won’t rope Adam into one of his schemes, but Rey feels it’s likely the other way around. They debate whether Chloe could be alive, and Rey points out Adam isn’t acting scared – the guy sets off his alarm bells and he wants Sharon to be careful. She promises to keep her eyes open.

At Dark Horse, Nick Newman (Joshua Morrow) calls to confirm his debt was sold to Adam Newman, then slams the phone down. Adam reiterates his ultimatum. Nick informs Adam he will never abandon Christian – if that means he loses Dark Horse, so be it.

Adam’s irked he calls Christian his son. Nick rails at Adam for trying to extort him for a child. Adam argues he drove him to it – how can he deny Christian his father’s love? Nick feels Adam could have slowly gotten to know the boy but that’s not how he operates. He hands him a photo of Christian – that’s as close as Adam will get to him. Adam vows Nick will regret this.

She’s not ready, but has job interviews and will move out. Devon wonders why she’d move out. After they share a meal, they slow dance and Devon vows to cook for her every night if it keeps her there. Elena was there to care for her uncle, but will stay in touch. Devon thinks she’d miss him and talking on the phone doesn’t compare to what they’re doing now. He doesn’t want to lose her.

They start making out. Elena asks, “Are you sure?” Devon leads her upstairs. In the bedroom, they undress. Devon’s so glad she came into his life. After making love, Devon sees an unhappy Hilary Curtis (Mishael Morgan). She disappears when Elena comes down. Devon assures Elena he doesn’t regret anything, then sees Hilary again over her shoulder.

In their apartment, Lola Rosales (Sasha Calle) and Kyle Abbott (Michael Mealor) canoodle and eat ice cream while discussing their engagement. Kyle notes he should have got her a ring first and asked for Rey Rosales’ blessing. She warns, “That’s not a good idea. Kyle insists he has to go to him first. As they kiss, Lola gives her blessing to ask for Rey’s blessing, then pushes Kyle onto the sofa and grins.

At Society, Y&R’s Abby Newman (Melissa Ordway) senses Jack Abbott (Peter Bergman) knows something and urges him to come out with it. Jack knows she’s sensitive about secrets being kept from her. Abby complains it’s happening again, and he prods her to go get what she wants.

He excuses himself to greet Michael Baldwin (Christian LeBlanc) and Lauren Fenmore Baldwin (Tracey E. Bregman). Later, Lola’s there and Abby congratulates her on the engagement. Lola promises not to complain if Kyle splurges on a ring. Nearby, Jack tells Lauren and Michael he’s pleased to see Lola so happy.

Young And The Restless Spoilers: Michael Baldwin Has A Legal Emergency And Leaves

Michael has a legal emergency and leaves. Jack asks Lauren and Michael’s secret to happiness. Lauren knows what it’s like to lose him and appreciates how lucky they are. Jack notes she’s radiant. She says he’s charming and the right woman’s out there.

In the tackhouse, Adam Newman stares at Christian’s photo. He gets a text asking his ETA. Adam will be there as soon as he can get away.

Y&R’s Nick Newman arrives at Sharon Newman’s place and updates her and Rey Rosales on Adam Newman’s ultimatum. Sharon can’t believe it, which exasperates Nick, who recalls what he did to Faith Newman (Alyvia Alyn Lind). Sharon relays she found Phyllis Summers at the tackhouse, so Nick realizes Adam used her and convinced her to act against him. He laments it’s the story of Phyllis’ life – never knowing what she’s got herself into until it’s too late.

Next week on #YR, Victor has a talk with Nate, Summer is concerned about her mother, and Kevin surprises Adam. pic.twitter.com/6HnASgX0NO

After Nick’s gone, Sharon fills Rey in on Adam taking Faith as an infant. He’s a damaged soul and they were kindred spirits in that way. She’s disappointed in Adam now. Rey gets a text from Kyle to meet.

At Crimson Lights, Rey Rosales informs Kyle Abbott it’s too soon to discuss marriage and refers to finding yourself trapped. Kyle says Lola’s not Mia Rosales (Noemi Gonzalez). Rey jokes that Lola’s annoyingly perfect. Kyle will take care of her and someday, their kids. Rey warns Kyle he’ll always be around, then concedes, “I guess you’re part of the family now.

At Y&R’s Nick Newman’s place, Michael Baldwin weighs in that Adam Newman might sell since he has no interest in Dark Horse. Nick needs a white knight investor.

Kyle Abbott returns home and confirms Rey Rosales’ on board, while Lola Rosales gushes that Abby Newman will help them plan. Kyle’s stoked she’s going to let him spend big money on the wedding of her dreams.

In a dark concrete room with a laundry tub, Y&R’s Phyllis Summers, unconscious, is thrown onto a bare mattress. She awakens and calls for help. Outside the door, Kevin Fisher (Greg Rikaart) listens. And that’s a wrap.