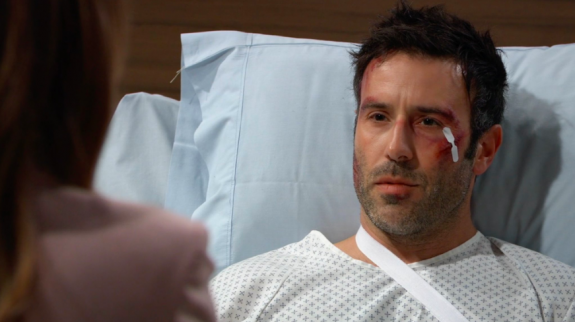 General Hospital spoilers tease that Shiloh Archer (Coby Ryan McLaughlin) will turn on the charm to get what he wants out of somebody in Monday’s General Hospital episode, possibly some unsuspecting General Hospital nurse who’ll be thrown off by his questions, even if he or she does know he’s under arrest and probably a criminal since he’s handcuffed to his hospital bed!

GH Spoilers: Shiloh Archer Will Turn On His Charm

Shiloh will ask someone how to track down a birth certificate! It would seem like a random, harmless question to someone who doesn’t know Shiloh or the whole situation with so many trying to protect Wiley Cooper-Jones (Eric and Theodore) from him.

He might even say he doesn’t have one of his own and ask how he can get one! Of course for an adult some form of ID is needed to get say, a driver’s license, but not necessarily a birth certificate, depending upon the state. But he will turn on the charm and the innocence no matter how he phrases his questions, to get the answers he needs!

Now, it is possible that the nurses and other doctors than Lucas Jones (Ryan Carnes) have been instructed to not answer questions like that from Shiloh, but it is unlikely considering General Hospital had another high profile prisoner, Ryan Chamberlain (Jon Lindstrom) to worry about on another floor. Lucas may or may not be working the same floor of the hospital as Ryan was on, and he may work different parts of the hospital, as many residents do.

But it is possible that Shiloh might be able to sweet-talk an unsuspecting nurse out of the information, and may even find out if copies are stored in the hospital; he could lie and tell them he was born in General Hospital to get the information! That’s where the problems could come in!

The unsuspecting nurse would tell him which form to fill out and what kind of documentation he might need, and what part of the hospital to go to for birth records; he or she might even ask if Shiloh wanted the forms now, after which he might accept the forms, and ask something off the cuff like out of curiosity, is the process different for a parent looking for a child’s birth certificate. The nurse might tell him!

Newborn original Wiley Cooper-Jones was brought into a room at GH for Lucas and Brad Cooper (Parry Shen) to meet, so there’s no reason to think he wasn’t born there. There is another hospital in Port Charles, Mercy Hospital, but nothing was mentioned in the scene that he might have been born there and not at GH; and with both adoptive parents working at GH that is more than likely where the birth took place.