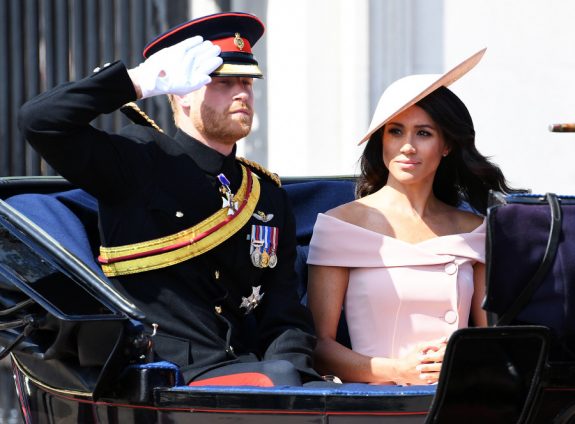 It looks like Meghan Markle might still be learning the ropes even though it’s already been a good year since she’s been on the job. There’s a new report that suggests Prince Harry had to remind his wife Meghan Markle of royal protocol when she greeted Queen Elizabeth at Trooping the Colour back in 2018. Here’s what you need to know.

The Duchess of Sussex made her official debut during the Trooping the Colour that year and needless to say, she looked breathtakingly beautiful. However, she still needed a few pointers from her husband Prince Harry, who gave her some cues that day.

Apparently, Prince Harry was still coaching her when it came to when to curtsy in front of the Queen and how to do it. There’s a new video clip that shows Meghan asking Harry under her breath, “Do it?” Harry then replied, “Yes,” to her before bowing his own head to his grandmother.

However, Meghan’s curtsy was a little out of sync compared to the rest of the royal family that day. The Duchess’ sister-in-law Kate Middleton can be seen curtsying without any prompt before Meghan was told to do so. But then again, Kate has been a royal since 2011!

A lot of royal critics also criticized Meghan Markle for what she was wearing that day, as it looked like she was showing off a little too much flesh compared to the other royals. The Duchess of Sussex wore an off-the-shoulder Carolina Herrera dress and Philip Treacy hat.

Today The Duke of Sussex visited the Royal Hospital Chelsea for the Founder’s Day Parade, an annual event celebrating the founding of the veterans hospital in 1681 by King Charles II. The Founder’s Day Parade is a day to celebrate ‘The Chelsea Pensioners’, the name for those veterans who live there, and an important reminder of the great debt we owe all whom have served their nation. More than 300 years on from its founding, @royalhospitalchelsea continues to provide exceptional care to soldiers in retirement. Today’s visit also coincides with the 75th anniversary of D-Day. It was especially poignant for The Duke, who served in the British Army for ten years, to visit with and honour six veterans of the Normandy Landing living at the hospital. In his speech today His Royal Highness shared these words with the Chelsea Pensioners: Don’t ever underestimate the joy that you bring to everyone you meet. You represent something really quite special, you are special, and society will always recognise that. That is an important part of your legacy….It’s a community that focuses on supporting each other with kindness, respect and compassion, as well as reaching out to serve the wider community….On this 75th Anniversary of D-Day, I can comfortably speak for everyone when I say we are honoured to be in the presence of six Normandy Landing veterans. Over 300 British Army Veterans live @royalhospitalchelsea – veterans who fought in the Second World War, and other conflicts including Korea, Malaya, Borneo, Northern Ireland, South Atlantic and the first Gulf War. Her Majesty The Queen, The Prince of Wales, The Duke of Cambridge and other members of The Royal Family have joined events in the UK and France to commemorate the 75th anniversary of D-Day. The Duke and Duchess of Sussex are proud to support serving and former members of the Armed Forces. Positive communities and the @royalhospitalchelsea model of care, is critical to help veterans both young and old to maintain positive mental health and wellbeing. Thank you for your service, and for the sacrifices you and your families have made. #DDay75

While it hasn’t been confirmed if Meghan Markle will be appearing at this year’s Trooping the Colour, there’s a good chance that if she does, she will curtsy to the Queen without cue or a nudge from Prince Harry. After all, she’s been doing this for a very long time now, Or at least, that’s what everyone’s hope is.

Meghan gave birth to her first son, Archie Harrison, back on May 6th. She’s currently on maternity leave with the little tot at home in Frogmore Cottage. We absolutely can’t wait to see Meghan and the entire Sussex family out and about real soon!

An incredible day at The Queen’s Birthday Parade 2019.

Thank you to all the soldiers, musicians and horses from the Household Division @Householddiv, The Household Cavalry @HCav1660, @KingsTroopRHA for a spectacular #TroopingTheColour. pic.twitter.com/iPwt7h3CXm